A year after the founding of the Loudoun Wildlife Conservancy it became clear to the organization’s leaders that a newsletter was needed to spread the word to its membership, which was then nearing 100 people. Because the loss of healthy wildlife habitats is the greatest threat to wildlife worldwide and especially in Loudoun County, consistently one of the country’s fastest growing counties, the word “habitat” was needed in the title. And so the Habitat Herald was born in the spring of 1996.

The Herald was fortunate to recruit Barbara Holland and Karin Scott as its first co-editors. Barbara was a world-renowned bestselling author of such books as Endangered Pleasures and The Joy of Drinking. Barbara edited the newsletter for its first three years, and wrote several articles as well, including a hilarious take on maintaining a garden when deer are around, called “Backyard Wildlife: The Downside.” 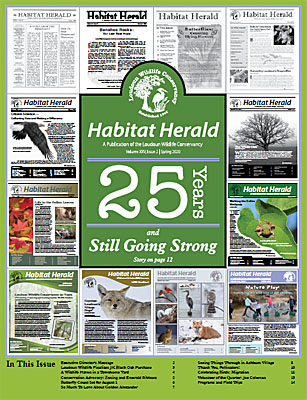 The cover article in Volume #1, Issue #1 was a word from the president of the organization, Diane Gilliam (now Fetterman), discussing what had been accomplished in the first year and what were their hopes for the future. There were updates from the committees, and several poems about nature from second graders at the Lincoln School. There was a column called “Naturally Loudoun” with a brief unsigned article about flying squirrels. And finally there were upcoming events, which included bird and wildflower walks, field trips, several slide shows at area libraries, and a request for volunteers to help with a count. If that sounds familiar, it is. It is inspiring to realize that although the Habitat Herald has evolved over time, 25 years and 80 issues later all of these features are still regularly a part of the newsletter.

In its first year, the Herald was only four pages long and in black and white with little or no graphics. As membership grew, so did the newsletter. In 1997, the Herald expanded to eight pages, and some color graphics were added — the winter issue that year had a yellow “slow” traffic sign on the cover in an article about avoiding roadkill, and there were several color drawings inside. A year later, after Karen Coleman and Leslie McCasker took over as editors, the Herald expanded to 12 and soon to 16 pages. Karen remained an editor for the next 10 years.

The entire Summer 1998 issue was dedicated to the importance of making Banshee Reeks a nature preserve, while several subsequent issues included articles encouraging our members to speak to the Board of Supervisors about that. This was the first, but not the last, time that the Habitat Herald played an important role in publicly advocating for wildlife habitat.

The first black and white photographs did not appear until the Winter 2003 issue, a Barred Owl and several others, but were not a regular feature until the Spring 2007 issue when the first front page photographs appeared, a Snowy Owl and a Pine Siskin. Color photography did not arrive until the Fall 2012 issue, which featured several photos relating to the lead article about life in the falling leaves of autumn.

In the early days, before the Internet, the Habitat Herald was the principal means to get the word out to the membership and public at large. Email and social media have expanded the outreach of the Conservancy, but the newsletter remains a critical part of informing the people of Loudoun about the important topics concerning its land and wildlife.

“The Habitat Herald has become an iconic feature of our education programs, and people continue to enjoy the articles after 25 years,” Executive Director Michael Myers said. “It contains a great blend of knowledge about wildlife, and information about our upcoming programs. The well-researched articles are an enduring source of information. It’s a great resource to introduce new people to the organization and a tremendous asset for the residents of Loudoun County.”

“When I moved to Loudoun 20 years ago I came across a Habitat Herald at the library,” recalled Julie Borneman, president of the Conservancy. “I found it to be a wealth of information about the wild side of Loudoun County. I always keep copies of the Habitat Herald with me to give to interested people. I feel it puts our best foot forward and makes a great first impression.”

The Habitat Herald team wants to thank all of the volunteers who have preceded us for establishing the standard of excellence that we try to live up to in every issue, and you, our readers, for your support of Loudoun Wildlife, which allows us to continue to work on the newsletter to keep you informed about the nature of Loudoun. Thank you.

Click here to the see the entire 25th Anniversary Issue