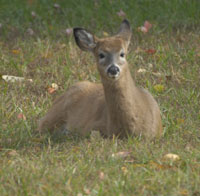 Loudoun County is generously blessed by deer. With more than 60 per square mile, the estimate is 20,000 to 25,000, and at times most of them seem to be in our backyard munching on the perennials. Matt Knox, deer supervisor for the Virginia Department of Game and Inland Fisheries, reports that our deer are well-fed–as many of us know from personal observation–and he estimates that the population could double or triple before any of them start to go hungry.

Gardeners trade tips on how to discourage them in the garden, but most of the helpful hints have limited effects. Human hair collected from the barbershop, predator urine purchased at great expense, dried blood – what do we think they are, stupid or something? Maybe from Monday till Wednesday they’ll shy away, but by Thursday they realize that human hair is no more threatening than the family cat, and they’re back in the flowerbeds again.

Probably it’s easiest to work around them. There are available lists of plantings that deer, it’s said, don’t eat. However, deer differ in their dining tastes and some of Loudoun’s, like the county itself, are becoming more sophisticated. Plantings unmolested by deer for 30 or 40 years are suddenly the specialite du jour. Most of the lists tell you they don’t eat broad-leafed rhododendrons, and they didn’t eat the fine tall native ones my mother planted in 1960 until 1994. That was a hard winter, granted, and you couldn’t begrudge them, except that they developed a taste for the stuff and have pruned the bushes into bizarre-looking trees every winter ever since.

A friend in the Park Service told me the only thing deer really, really don’t eat is Colorado blue spruce. Anyone who’s ever tried eating it can understand why.

All the lists tell you deer don’t eat daylilies. Mother planted daylilies here and when I came in 1990 I expanded and added to her collection until, every summer, I had a paradise of them stretching across the hillside for two months of astounding color. In early spring, deer ate the young shoots, but they quickly recovered. Then three or four years ago some fool showed a deer a Chinese cookbook that suggested stir-frying daylily buds, and ever since then the deer, skipping the wok, have stripped every one of the thousands of daylilies of every bud before it opened.

I know some people who live in deer-free areas, and I dig up my daylilies and pass them on. The purple coneflowers have taken over their hillside. Deer don’t eat them. I do miss the daylilies, though.

Other things they won’t eat include the spiny unkillable Japanese privet invading my woods, poison ivy, the Oriental bittersweet and Japanese honeysuckle killing the trees, the kudzu creeping in from the road, or the garlic-mustard crowding out the wildflowers. In short, if you don’t want it, they don’t either.