Birds of Prey Outing A Success 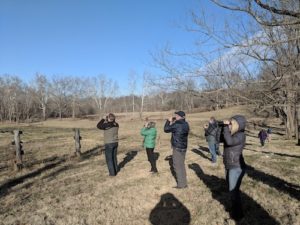 The morning of Saturday, January 26, Liam McGranaghan introduced 25 enthusiastic people to the many birds of prey that call Loudoun home and several others that over-winter here.  After a short break for lunch, the group people met the trip leaders, Liam and Laura McGranaghan, Bryan Henson and Allison Gallo, Gerco Hoogeweg, and Liz Dennison, and broke into two groups searching for hawks, eagles, falcons, and owls.

And they were successful! Several Gray Ghosts (Northern Harriers), majestic Bald Eagles, an amazing number of buteos (30 Red-shouldered Hawks and 24 Red-tailed Hawks), Cooper’s Hawks, our smallest falcon – the American Kestrels (including a pair mating), a Great Horned Owl, a Barred Owl, as well as some other birds including several ducks, brightly colored Eastern Meadowlarks, and a noisy Belted Kingfisher were seen.

As Bryan Henson said, “Good weather and good people – it doesn’t get much better than that!” 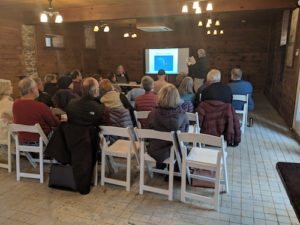 During the class Liam emphasized the linkage between birds of prey and field mice and meadow voles; in the afternoon he spent some time demonstrating where and how many of both are around.

And as another of the leaders, Laura McGranaghan said “What a great time we had!!”

Every winter the Loudoun Wildlife Conservancy sponsors a Birds of Prey Field Trip – if you missed this one keep your eyes open for next year’s as they’re a great deal of fun and a wonderful introduction to the nature that surrounds us and makes Loudoun County such a special place to live.