How to Create a Backyard Oasis in the Suburbs 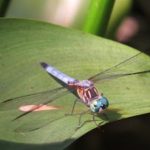 Within a few short years Loudoun Wildlife Conservancy members Allison and Bryan have turned their backyard into a small but thriving oasis of native plantings in a typical suburban neighborhood — and they also have a spectacular list of critter sightings. They have recorded 35 species of butterflies, six of dragonflies, frogs, Five-lined and Broad-headed Skinks, and nearly 70 species of birds, including American Redstarts, Magnolia Warblers, Common Yellowthroats, Ruby-throated Hummingbirds, a Fox Sparrow and even a Cooper’s Hawk.

How did they do it?

Bryan explained that at the start, the yard was simply unkempt grass, with less than an inch of poor topsoil over dense clay. He wasn’t even a gardener, but he was interested in butterflies, so he picked up some coneflowers (Echinacea sp.) and Black-eyed Susans (Rudbeckia sp.). Because of the poor soil, the plants were put into pots — and that also meant they could be moved around until they were in an ideal spot to flourish. The splash of color they provided served as a great motivator for the homeowners to keep going. 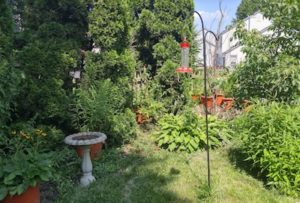 As the butterflies started to visit, Bryan learned that to complete their lifecycle, butterflies need host plants for their caterpillars, as well as nectar for themselves. The addition of two raised beds added growing space for a wider variety of important native plants like coreopsis, Joe-Pye Weed (Eutrochium sp.) and bee balm (Monarda sp.), and that brought in hummingbirds too.

Allison takes up the story: “We wanted to attract dragonflies, so we made a container water-garden at the edge of the deck. We added a second one at the front of the house by placing the container on the ground and building up a raised bed around it. Not only did the dragonflies arrive, but frogs too.” In fact, adding the water features was a turning point, with many more critters turning up.

Allison and Bryan leave the forbs standing through the winter to provide seeds for birds and overwintering sites for critters such as native wasps, bees and spiders. In the spring they transfer the clippings to a small brush pile, which has recently hosted Five-lined and Broad-headed Skinks. 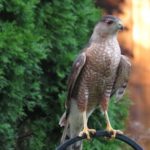 They continue to develop their garden. Says Bryan, “Some plants do well and others don’t, so we are learning all the time.” Some plants do “too well” and can threaten to overrun a small yard, so they have to be either trimmed back, like New York Ironweed (Vernonia noveboracensis), or pulled, like Mountain Mint (Pycnanthemum sp.). Working with the plants gives the homeowners great opportunities to closely observe the variety of pollinators that visit.

Like many other gardeners, Allison and Bryan have to work within the guidelines of their HOA. That has factored into their selection and placement of plants, but it has not been a significant limitation. Their advice to anyone hoping to follow in their footsteps is to take small steps and undertake only a few modest projects each year. Doing too much too soon can be overwhelming.

Allison and Bryan’s property was certified as a Wildlife Sanctuary by Loudoun Wildlife Conservancy Audubon at Home in 2016. If you would like to find out more about providing habitat for wildlife on your own property and the Audubon at Home program, please contact Anne Owen at aowen@loudounwildlife.org for more information.

All photos by Allison Gallo and Bryan Henson

Tags: Audubon At HomeGardeningLiving with wildlife
0