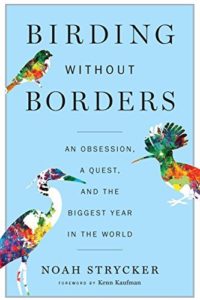 Fans of The Big Year, Mark Obmascik’s account of three birders attempting the 1998 North American Big Year, know it is a highly competitive enterprise. Those who attempt it must crisscross the continent multiple times in an effort to see every bird that sets foot in North America. As we learn early in Birding Without Borders, Noah Strycker’s entertaining account of his 2015 International Big Year, this adventure is a bird of a different feather.

The Clements Checklist, the most commonly used list of world birds, identifies 10,365 species worldwide. It would be impossible to even attempt to see all of these birds in a year. There are simply not enough days in a year (or even a lifetime—the longest life list is around 9,600) to see them all. In some areas, there are not enough birds to justify a visit when every day counts. Other locations, like Syria or Somalia, are just too dangerous. There are also places (think North Korea) where a foreigner wandering around with high-end optical equipment would likely be treated as a spy. As a result, before Strycker’s 2015 Big Year, the world record was only 4,341 birds.

Starting to plan a year before, Strycker, an editor for Birding magazine, set his goal at 5,000 birds. He began contacting local birders around the world through online resources, hoping to recruit them as guides, and often as hosts for a night or two. After all, local birders know best where to find the local, or endemic, birds, and when you need to find about 13 new birds a day, every day for a year, those pervasive birds are the ones you need to find.

Strycker began his year on a cruise ship in Antarctica, drinking champagne at midnight, looking for penguins, but finding a Cape Petrel as the first bird of the year. He then worked his way up through South and Central America, reaching 2,500 birds by mid-May. He spent only a few weeks in the U.S. looking for our endemic birds, such as Blue Jays and Tufted Titmice, having seen most of our common North American birds during their (and his) migration northward. Next he was off to Europe for two weeks, and then to Africa for three months, followed by Asia for two months (where he reached his goal at the end of October). He continued on to Australia, Papua New Guinea and New Zealand and then back to India for a few days, finishing with more than 6,000 birds.

Readers, especially birdwatchers, will find Strycker’s account enchanting for two reasons. First, of course, are the birds themselves and his descriptions of the search for rarities like the Harpy Eagle (“a Sherman tank with fighter-jet wings”), or the Golden-masked Owl, a species that had not been seen for nearly 30 years. Second are the stories of the people who agreed to help a complete stranger find all the local birds, and took the time to make road trips with him around their country. It says a lot about the community of birders, and even more about Strycker, that this world tour went off with very few hitches.

For those of us who are not going to attempt an International Big Year, Birding Without Borders may very well be the next best thing.