Some of us root for Peter Rabbit on his tales of adventure while many others side with Mr. McGregor, as he tirelessly tries to protect his garden from Peter and his family. Regardless of which side you are on, cottontail rabbits are abundant in our literature and our lands. Bugs Bunny, story book bunnies, rabbit holes and magic rabbits paint a picture of clever creatures with determination and proliferation in their bag of tricks. 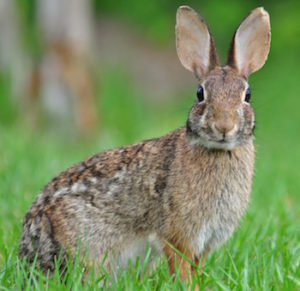 The Eastern Cottontail Rabbit (Sylvilagus floridanus), which is native to and found abundantly around the eastern United States, has a reddish-brown to grey coat, and the small fluffy white tail that gives them their name. Not a very large species of rabbit, the Eastern Cottontail averages around 3 pounds, and can grow to 15-18 inches long. As herbivores, their natural diet consists of clovers, grasses, and broad-leaf weeds in the summer, and buds, twigs, and bark in the winter.

As for their habitat, Eastern Cottontails generally inhabit open spaces, meadows, and fields near wooded areas. Visible throughout the year, including the winter months as they don’t hibernate, Cottontails are a diurnal species and are active during the day. However, if you want to spot one, its best to look during the twilight hours of dusk and at dawn when they tend to be the most active. This is also the time when mothers will feed their young.

Cottontails have many different indigenous predators, including foxes, coyotes, bobcats, hawks, and owls. Even domesticated dogs and cats will hunt rabbits. Being numerous, they are an ample and year-round food source. However, they have their own tricks to avoid being eaten. To survive to adulthood and reproduce, these rabbits use their coats as camouflage. When they stay still and low, their coats blend into the vegetation. If that is not good enough, a rabbit can bolt with speeds up to 18 miles per hour and run in a zig-zag pattern with its fluffy tail raised high to confuse the predator.

Eastern Cottontails mature rapidly and can live up to three years in the wild. They usually reproduce three to four times per year, with litters of three to eight. Without predators to control the population, they can become a nuisance.

When preparing for offspring, a mother rabbit first builds a nest. This is solely the female’s task, as males are not involved with the nest or caring for the young. She digs out a shallow, narrow depression in grasses or under bushes where she feels safe. Sometimes nests can be found in the open and in yards. The nest is then lined with grasses and fur to keep the babies warm and protected. For added protection, the mother leaves the nest during the day to help keep predators away from her offspring. The mother Cottontail returns back twice a day, in the morning and evening, to feed her offspring. She continues to feed them until they are independent, about four to five weeks.

Some may look at the Eastern Cottontail as a nuisance and garden invader. However, these creatures can be beneficial to the ecosystem and helpful to our local habitat. From a personal viewpoint, I welcome Cottontails into my yard, as they enjoy eating dandelion weeds. Instead of using chemical weed killers, rabbits will do the work for me, while getting their nutrition and providing a food source for predators. If a balanced ecosystem exists and there are enough predators to keep the rabbit population in check, they are less of a nuisance.

The Eastern Cottontail’s diet of weedy greens helps ensure healthy meadows and open spaces, but unprotected gardens can be an inviting buffet. While sometimes a nuisance for gardeners, the rabbits can be prevented from eating vegetables and flowers by employing a few simple tricks. The best way to keep rabbits out of gardens is by using chicken wire. Placing the wire in a shallow ditch about 6 inches deep and high enough to protect plants will do the trick. I have also found it effective to use wire to plug holes in existing fencing to discourage rabbits. This also helps to deter other burrowing animals like groundhogs.

As a very common animal here in Loudoun County, the Eastern Cottontail Rabbit is a species that is important to the balance of our ecosystem, benefiting myriad other animals, including humans. Fortunately, our county still has some natural predators, which are vital for keeping rabbit populations in check and maintaining a balanced ecosystem, where rabbit populations stay at safe and stable levels. If we manage our habitats wisely, then gardens and garden creatures can co-exist and we can enjoy all that Cottontail Rabbits bring to our lives.