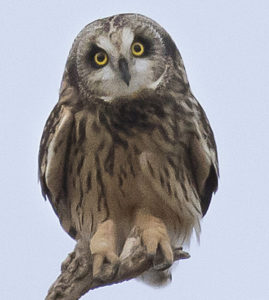 On October 19, 2017, Loudoun Animal Services got a call that an injured Short-eared Owl had been found in the parking lot of One Loudoun Mall in Ashburn, Va. The owl was carefully rescued by Officer Kelli Kleptach and Billy Rios, a raptor rescue expert. Rios then transported the feathered patient to Wild Vet Care for evaluation and treatment.

The owl had head trauma and a detached retina that had likely been caused by collision with a vehicle. Dr. Belinda Burwell of Wildlife Vet Care treated the owl’s wounds and said the owl responded well and gained back vision in his injured left eye. They monitored his progress until it was determined that he had healed sufficiently to be released back into the wild. After the raptor passed a series of tests to prove he could make it on his own, his release was scheduled on December 2. Several people from the community came to the “Release Party” at Blandy Experimental Farm to witness this little guy’s return to the wild. That spot was picked both because it met the criteria for Short-eared Owl habitat and the species had been seen there before.

Dr. Burwell skillfully removed the owl from its crate and allowed the attendees to take a rare close look at this beautiful wild raptor before he was released. She carefully positioned the owl for takeoff and tossed him into the air, where he flew off with no hesitation.

Because this owl arrived ahead of schedule for the typical Short-eared Owl migration, it is suspected that he is from this year’s hatch. Short-eared Owls (Asio flammeus) typically arrive in Virginia in early November. They migrate down from the Arctic tundra to spend the winter here, preying on mice and voles. These owls are frequently seen in the daytime and early evening, hunting in open pastures. 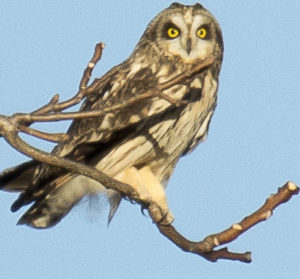 Their summer nesting grounds are in the far northern plains and tundra, where the female builds a nest by creating a shallow depression on the ground and lining it with feathers and grass. The male will bring food to her on the nest while she tends to the owlets.

Not all injured wildlife stories have a happy ending like this one, but thanks to the generous teamwork of the community, we have one more free wild neighbor to fulfill his niche in our intertwined environment. 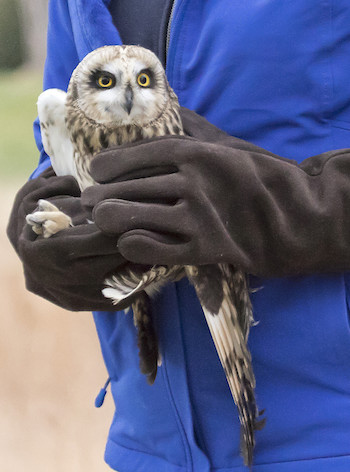 Veterinarian Belinda Burwell has been rescuing and caring for wildlife for 30 years. She founded the Blue Ridge Wildlife Center hotline in 2000 to answer questions and offer help with wildlife emergencies, and then in 2004 opened the BRWC wildlife rescue center. In 2015, she opened Wildlife Veterinary Care to fill the need for wildlife rescue and stewardship in Northern Virginia, West Virginia and Maryland.
Dr. Burwell is a graduate of Duke University with a B.S. in Zoology, and received her Veterinary Medical Degree from Tufts University. The majority of her study at these institutions was Zoo and Wildlife medicine. She has been rescuing and rehabilitating wildlife since 1987 and is a Certified Wildlife Rehabilitator through the International Wildlife Rehabilitation Council. She also serves on the Certified Wildlife Rehabilitator Examination Board and on the Advisory Board of the Animal Rescue Fund. In addition, she is a Virginia Master Naturalist and instructor.
WVC is a 501(c)3 organization.
www.wildlifevetcare.com.