Biology originally relegated all living things to two kingdoms; Plantae and Animalia. This was always problematic when classifying single-celled organisms like the Euglena, which has the mobility of an animal and the chlorophyll of a plant. Fungi were considered members of the Plant Kingdom (the division Eumycota) even though they reproduced with spores and relied on chlorophyll-producing plants and other hydrocarbon sources of less repute such as manure and decayed logs for nutrition. In that dinosaurs were once considered reptiles, it is not at all surprising that the somewhat arbitrary nature of classification by taxonomy could yield anomalous results. With the increasing use of DNA testing to validate these relationships, the classification scheme originally devised by Carolus Linnaeus in the eighteenth century will no doubt be subject to additional revisions.

In 1969, R. H. Whittaker of Cornell University proposed five principle kingdoms: the original Plantae and Animalia with the addition of Fungi, Protista and Monera. Fungi included mushrooms, molds, mildews, yeasts, brackets and puffballs. Monera were the bacteria. The problem was that the fifth Kingdom, Protista, was for anything else that didn’t fit one of the other four categories, such as amoebas, algae and slime molds, containing as many as 200,000 different species. To complicate matters, Carl Woese of the University of Illinois posited three domains: Bacteria, Archaea and Eukarya to take into account the unique genetics of bacteria and Harvard zoologist Ernst Mayr later suggested two empires: Prokaryota for simple bacterial entities and Eukaryota for the more complex organisms. This debate rages on, but the key point is that fungi are not plants in any of these organizations. Fungi are fungi (the preferred pronunciation according to Webster’s Dictionary is funj-eye but I have heard fung-eye, funj-ee and fung-ee with almost equal frequency). 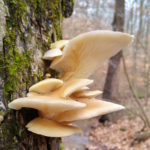 Wild mushrooms are highly regarded by most cultures of the world as an important and delectable food source. Many fungi have the taste and texture of meat, attributable to their conversion of  the plant nutrients into chitin, the same material that is used by insects for their exoskeletons. Appellations such as “Chicken of the Woods” and “Beefsteak Fungus” reflect this gastronomic verisimilitude. However, the British make a distinction between the edible field mushroom that is cultivated commercially, and all others which are called toadstools and are considered poisonous. The etymology of this term is curious, as it has nothing to do with the notion that toads may use the mushroom as a perch, as they  are so frequently depicted in ceramic caricatures and children’s’ fantasies. Toadstool is a calque of sorts as it is of German origin, the word todesstuhl meaning “death chair”. Apparently the British took to the notion of a warty toad using the hated fungus as a throne. Americans have for the most part followed British traditions in their general apprehension of any mushroom not purchased in a proper commercial establishment.

The word mushroom itself is of uncertain etymological origin. It derives from the French word “moisseron” which is in turn derived from “mousse”, the French word for moss. Perhaps this is due to the dark, dank mossy habitat where mushrooms thrive and moisseron became mushroom as a calque, using existing English words as antonyms for the French. Interestingly, the French word for mushroom is “champignon” from champs meaning fields (Paris’s Champs Ėlysées is the Elysian Fields, where fallen warriors live in perpetual bliss in Greek mythology). “Champignon” is also the German word for mushroom, evidently taken directly from the French. And to really confuse things, the Latin word for mushroom is “fungus”, which in turn derives from the Greek “spoggos”, or sponge. Presumably, the Greeks, well known for sponge diving, thought that there was a resemblance between sponges and fungi, as both are fibrous, compartmentalized, and “spongy.”

The mystifying, spontaneous emergence of mushrooms after rain is so notable that the very term “to mushroom” suggests explosive growth (both before and after the advent of the atomic bomb cloud of the same name). To understand why this occurs, it is necessary to delve into the recondite realm of spores, hyphae and mycelia. The evolutionary reason why mushrooms have caps is so that the spores which are located on small club-like structures called basidia attached to the gills under the cap are afforded the necessary humid environment for spore ejection. When the spores are ejected, the wind carries them to new habitats. When a spore lands in an auspicious locale, it will start to grow, sending out an initial filament called a hypha that will branch repeatedly to create a fibrous mass called a mycelium. 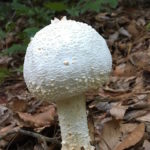 The mycelium is the corpus of the fungus (what would we do without Greek?). It is as elusive to the casual naturalist as are the roots of a tree, as the hyphae are interwoven into the soil and detritus of the forest floor and thus virtually impossible to discern. Mycelia can grow to gargantuan proportions, limited only by the extent of a benign ecosystem. It is part of the accepted common folklore that the largest living thing in the world is a fungus that occupies some forty acres in Michigan. As I recall, the Soviets claimed during the Cold War that they had the world’s largest fungus. They probably did and still do for all that it now matters.

The mycelium that results from a single spore cannot create a mushroom. It takes two compatible hyphae growing from two compatible spores to do that. In this sense it is like the male and the female genders of most plants and animals. But with fungus, it is much more complicated, as there are a lot more pairing possibilities. There has been limited study in this area due to the difficulty in distinguishing different hyphae based on appearance. Understanding pair-wise behavior is dependent on a large number of tedious empirical observations. What testing has been done has shown more than 20,000 pairing combinations in some mushrooms. Each hypha brings one nucleus to the union, creating a cell with two nuclei, called a dikaryon. In this combined form, the mycelium grows, taking its nourishment from a variety of organic sources.

Mushrooms form from the dikaryon mycelium by coalescing into a more dense fibrous mass known as a primordium. The structure of the mushroom is established in embryonic form at this point with a distinct cap and stem, poised in the mycelium for the appropriate environmental stimulus, moisture. After a rain, water permeates the ground and the inchoate mushroom absorbs it, expanding rapidly with the pre-existing structure now enlarged by the addition of the fluid. This is why mushrooms pop out of the ground overnight after a rain. The moisture trigger is also relevant to the propagation of the species, as the mushroom will open and release its spores when environmental conditions are likely to favor their successful incubation.

Fungi are among the most notable features of any woodland trail. The bright orange glow of Jack-O-Lantern mushrooms huddled at the base of a tree is as striking as the delicate structure of the Pink Lady’s Slipper orchid. Their spontaneous appearance and ephemeral presence are like the wildflowers that enjoy universal adulation for their aesthetic qualities. But in spite of the esthetics of their geometric balance, mushrooms are maligned, subject to all manner of hyperbole about their toxicity and hallucinogenic nature. It is a matter of education, as fungi are of great importance to woodland ecology and to the economics of any agricultural enterprise. And that is the motivation for learning mycology and for transmitting that knowledge to others, the mushroom chronicles.

Look here at 5 different kinds of mushrooms that are relatively easy to find.