Phenology is the study of natural phenomena that recur periodically such as spring daffodils and autumnal apples. Phenology is fundamental to understanding fungi. While we think of mushrooms as fungi, they are in reality only the ‘fruiting bodies’ of the epigeal (above ground) or underground fungi they seek to reproduce using spores instead of seeds. Like plants, fungi sense the temperature, humidity, and probably daylight duration to trigger mushroom emergence to enhance the chance of successful spore deployment and germination. Mushrooms mysteriously emerge overnight because the underground fungal body called a mycelium was ready to reproduce and invested energy to create an underground ‘proto-mushroom’ called a primordium to be ready when conditions were right – such as just after a soaking rain. The moral of the story is that if you want to find mushrooms, go out in the fall after a good soaking rain because the season of growing is drawing to a close and moist, cool ground is the best substrate for spores. As a primer, five fungi that are relatively easy to find and identify are described in this article as a means of getting started. A necessary caveat: identifying mushrooms is more art than science and there is no substitute for an experienced human field guide to validate specifics; caveat emptor. 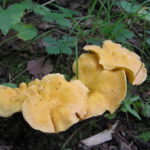 The chanterelle has a distinctive cup-shape and is yellow or golden in color. There are a number of different species but all are characterized by having spore-bearing ridges instead of gills on the underside of the cap. The cap edge or margin is irregular or wavy, i.e., not round like the classic mushroom shape. They grow on the ground and are usually found in extensive patches when the phenology is right. They are about 1 to 6 inches in diameter and 1 to 3 inches high. They can be found from June to September under oaks and conifers. The chanterelle is one of the most popular edible mushrooms in the world but it has a ‘doppelganger’ that looks very similar but is poisonous. 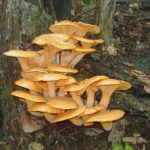 The Jack-O-Lantern is yellow to orange in color like the chanterelle and is superficially similar. On closer inspection, the underside of the cap has very distinctive sharp decurrent gills, meaning that the gills descend down the stem. They also grow on wood and are found in clusters (several stems emanating from the same spot), whereas chanterelles grow on the ground and have one single stem. The name Jack-O-Lantern refers to the eerie greenish glow that they emit when taken to a very dark room. They are poisonous and ingestion will result in gastrointestinal distress for up to two days. 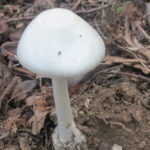 The Destroying Angel is an apt name for one of the most deadly mushrooms. Consumption of only a small portion of this mushroom can result in liver failure and death. The angelic name also conveys the delicate beauty of the mushroom. It is pristine white throughout, including the cap, stalk and gills; it even produces white spores. One key identification feature is the cup, called a vulva, at the base of the stem, as seen in the photo. This can usually only be seen if the dirt around the base is excavated. The vulva is the bottom part of the mushroom when it was formed as a primordium underground. When the mushroom emerges, vulva and cap break to expose the spore-bearing gills. 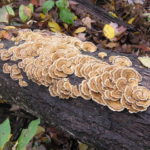 The Turkey Tail is easy to identify and remember as its name serves as a mnemonic memory device; it has the concentric rings and colors of a turkey tail. This is an example of a type of fungus called a polypore meaning many pores. While some mushrooms have gills from which the spores emanate, many have round holes called pores instead. These are typically attached on one edge and are frequently called bracket fungi or shelf fungi as a result. Turkey tails are not edible, but they have been used in Asia for general health promoters for centuries. Polysaccharide–Kureha, simplified to PSK, is the predominant fungal compound used for medicinal applications; it is sold commercially as Krestin. Turkey tail grows in small, overlapping, leathery brackets on dead logs. It is quite common and can be found throughout the year. 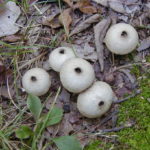 Puffballs are aptly named according to the method of spore dispersal; rather than gills, a hole forms at the top of the spherical body which ejects spores in ‘puffs’ when the outer surface is struck by a raindrop. They range in size from the gem-studded puffball, which is about one inch in diameter to the giant puffball, which looks like a white soccer ball. They are mostly found scattered on the ground, although one type forms clusters on wood. Young puffballs that are pure white inside are edible.