Butterfly Count 2017: Numbers Are Up! 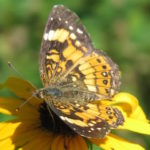 For a human, the cool, almost autumnal weather of Saturday, August 5, was greeted with delight. The fresh wind and pleasant temperatures were a welcome relief from the typical heat and humidity of our summers. However, this did not bode well for the 21st Annual Butterfly Count. These winged beauties don’t like to be buffeted about while getting on with the business of survival. And sure enough, as our team assembled and began the count, our first garden yielded a mere handful of cabbage whites, a couple of skippers, and some Monarch caterpillars. Up until that day, we had all noted that this was a good year for butterflies, that flight was maximal, with a great variety of species. We prepared for disappointment.

But no! As temperatures climbed and winds calmed a bit, the butterflies took to wing and our counts improved. Forty volunteers in seven teams searched out 2,194 butterflies, identified in 50 species, topping last year’s count of 2,145 butterflies and 41 species! Pipevine Swallowtails, missing in the last two counts, are staging a comeback with 23 sighted and at least 9 caterpillars discovered on the host plant, a pipevine (Aristolochia sp.), trained over a tall arbor. Clearly one garden has had an impact on this butterfly species’ population, an important key, in addition to weather, to butterfly presence and survival. A couple of unusual skippers—Hobomok Skipper and Hayhust’s Scallopwing – were also sighted. For a complete list of this year’s results, and previous count data, click here.

Great thanks to our leaders: Bob Blakney, Joe Coleman, Phil Daley, Cliff Fairweather, Jon Little, Larry Meade, and Eric Raun. And thank you, too, to all our butterfly counters. I am already studying up for our 22nd Annual Butterfly Count, which will be on Saturday, August 4, 2018.