Volunteers in Action at Phillips Farm Teaming Up To Plant Trees and Shrubs, Save a Stream, and Protect Pollinators

On Wednesday, May 17, the Loudoun Wildlife Conservancy and the Waterford Foundation continued their conservation efforts at the Phillips Farm with the assistance of a number of volunteers from the Institute for Building Technology Safety (IBTS), using funds raised through the sale of the special Chesapeake Bay license plate “Friend of the Chesapeake.” In 2003, this 144-acre property was to be developed and subdivided, but the Waterford Foundation raised $4 million dollars to purchase the farm. The land is now protected with conservation easements that protect valuable riparian habitat and numerous plants and animals.

Volunteers planted an additional 109 trees and shrubs ranging from Sycamores to Viburnum, continuing to diversify and strengthen the buffer habitat. These plants, combined with past planting efforts beginning in 2008, bring the total trees and shrubs planted on the Phillips Farm to about 1,200. Leading up to the May 17 event, the McIntosh family, which serves on the Phillips Farm Committee, dug holes for the trees and shrubs and delivered mulch to the planting areas. On the morning of the 17th a group of volunteers from IBTS arrived at the mill area with their work gloves, waterproof shoes, bug spray and great tee shirts! Working with volunteers from both Waterford and Loudoun Wildlife, they worked long and hard, seemly unfazed by the excessive heat and sun. After a relaxing lunch on the mill lawn, where they heard about the beneficial impact of what they were doing for the Monarch butterfly population, they returned to work to finish and clean up before finally calling it a day at 3 p.m. 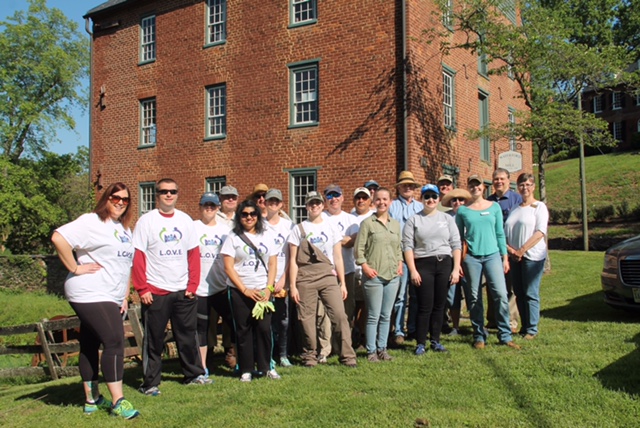 All of these plantings combine to form a riparian buffer, a combination of trees, shrubs, and other vegetation that protect water quality by trapping pollutants. These buffers also help control flooding and remove excess nutrients from the water. A 100-foot buffer, as required by the Deed of Easement, on either side of the Catoctin Creek as it makes its way across the Phillips Farm, helps protect water quality in Loudoun. This type of buffer is essential to protecting our water for human and animal and wildlife consumption. Proper buffer control also requires keeping livestock out of the buffer and other streams on the farm.

Protecting water quality also protects the organisms found in the creek or stream. Vegetation helps keep the water at a stable, mild temperature and traps excess sediment that can clog the gills of fish. As the quality of a stream declines, populations of fish more tolerant of poor conditions, carp for example, can increase, pushing native fish out of their natural habitats. This is one reason why maintaining riparian buffers is vital. Not only do the plants improve the conditions for aquatic life, they also provide food and shelter for other wildlife. A wide, diversely-planted buffer has a large impact on the surrounding ecosystem.

Phillips Farm is also a certified Monarch way station, providing necessary resources that Monarch butterflies need during their migration to and from Mexico. Milkweed is the only food source for Monarch larva so they lay their eggs on the Milkweed plants. Monarchs and other pollinators are in danger of becoming extinct due to habitat loss and disease. If Monarchs and pollinators disappeared it would be a disaster for ecosystems worldwide, and humans would be greatly impacted. Pollinators help fertilize plants, as they move pollen from one plant to another plant of the same species. This pollination results in seeds that eventually grow into the next generation of a plant. More than 300,000 plant species require animal pollinators, including three-fourths of our major food crops. Without pollinators, many plant species would cease to exist, and because plants act as the foundation for many terrestrial food chains, other organisms would be threatened as well. This is known as the cascade effect. It’s evident that pollinators such as Monarchs have a big impact on the environment, which is why conservation and creation of way stations, such as the one at Phillips Farm, are so important.

Also on May 17, under the leadership of Ann Garvey, 14 new trees and shrubs and numerous perennials were planted at the Interpretive Pull-Off Area. Julie Borneman of Watermark Woods and Ann donated the perennials to replace the invasive perennials that are trying to take over.