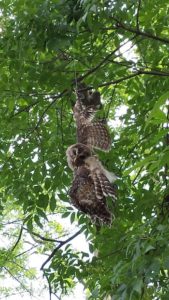 Monofilament, or fishing line, is a deadly trap.

When living in close proximity to humans, wild animals become injured in various ways. At the Blue Ridge Wildlife Center (BRWC), where we rescue and care for thousands of injured native wild animals each year, we gather data on the many ways wildlife become injured.

Collisions with motor vehicles are by far the most common cause of the injuries we treat, and this is not only because these animals were crossing the road. Litter thrown from vehicles often contains food, and this attracts animals to the side of the road where they are likely to be struck. In addition, rodents feeding on litter attract the hawks and owls that prey on them, which subsequently are also struck by cars. To make matters worse, road kill itself attracts scavengers, including raccoons, opossums, skunks, hawks and eagles to the road. So it’s no wonder so many animals are hit on the roads. Picking up litter and eliminating it from the roadway makes our roads safer for wildlife, as does removing any animal unfortunate enough to be killed on the roadway.

Litter itself can injure and kill wildlife, even when it is not near a road. Animals can become trapped in containers, strangled by plastic bags and rings, or develop digestive blockages after consuming nondigestible packaging that either looks like food or smells like the food it once contained. Everyone can help by ensuring trash is securely sealed in trash bags and by picking up litter. Following the three Rs – reduce, reuse and recycle – is a good way to decrease the amount of trash that needs to be disposed of properly. 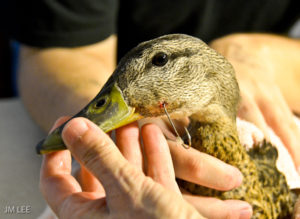 There is one particularly dangerous type of litter that most people never think about: discarded fishing tackle. Every year Blue Ridge Wildlife Center receives a surprising variety of species that have become tangled in fishing line or snagged by fishhooks. We’ve rescued owls, herons, ducks, geese, raccoons, turtles and songbirds that have this almost-invisible line wrapped around wings and legs, trapping them and strangulating their limbs. In other instances, fishing hooks have caused deep wounds and anchored animals to snagged line. These animals die a slow and painful death if not found quickly. Putting up a receptacle for discarded line and hooks at fishing locations can remind anglers of this danger to wildlife. If you find discarded fishing line or hooks while walking trails, please help protect wildlife by disposing of it properly.

Another common hazard to wildlife is outdoor cats and dogs, which kill and injure a very large number of wild animals every year. BRWC cares for more than 300 animals injured by cats and dogs per year. It is estimated that outdoor cats in North America kill more than a billion wild birds each year, according to research at the Smithsonian Conservation Biology Institute in Front Royal, Va. Keeping your cats inside and preventing your dog from roaming makes you a good neighbor to the wildlife around your home. Window strikes also injure or kill millions of songbirds each year. Depending on the situation, moving bird feeders, or using a realistic owl statue or silhouette, can help prevent these strikes. Sometimes an external film or screen needs to be put over the window to protect birds. More solutions can be found online at birdwatchingdaily.com. 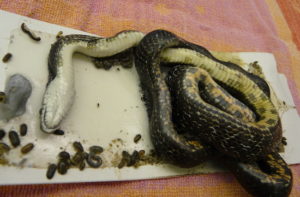 Pesticides and rodenticides are a silent danger to non-target wildlife. Many people don’t realize that pesticides not only poison insects, but also the birds and bats that eat them. Using less toxic alternatives to control your insect problems can save the lives of those species that help keep insect populations under control. In the same way, rodenticides kill not only mice and rats, but also the animals that eat them, especially hawks and owls. Sticky traps are a cruel way to trap rodents and will kill any animal that becomes stuck to them, including bats and snakes – the species we most commonly see stuck to these traps. Using rodent live traps or carefully placed snap traps are safer for non-target wildlife. 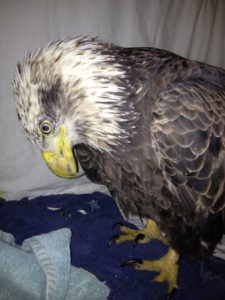 Every year, a large number of sick eagles, hawks and vultures brought to the BRWC are determined to be suffering from lead poisoning through blood testing and radiographs. These animals are being poisoned by consuming small fragments of lead bullets or lead pellets in the carrion they are eating. When a lead bullet hits an animal, small fragments of lead spread out from the wound into the body of the animal. Too small to be easily detected, these toxic pieces of lead are being eaten by scavengers and hunters alike. These scavengers are much smaller than humans, weighing only 1 to 10 pounds, so eating just a few small fragments of lead is enough to cause lead poisoning and damage their nervous systems, leaving them unable to fly or even walk. If not treated, they will die. Hunters can help prevent this accidental killing of non-target species by using only non-lead ammunition.

These are only a few of the more common ways we have seen local wildlife become injured and killed. Increased awareness and prevention of these hazards can save the lives of our wildlife neighbors and make us good stewards of wildlife.

You can learn more about us and how you can help protect wildlife at blueridgewildlifectr.org.

Tags: Hazards to wildlifeLiving with wildlife
0