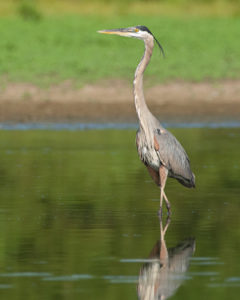 In the back of our neighborhood we are incredibly lucky to have access to the Potomac Heritage Trail, part of which runs through deep, marshy wetlands flanked on one side by a shallow pond and on the other, the Potomac River. One of my favorite things to do on cool summer mornings is take an early morning hike to the river while the mist still rests on the pond and the sky is a pale lavender. This time of day is so peaceful and quiet with the sun just peeking up over the horizon. It’s at this time of day that I can almost always depend on my friend, the Great Blue Heron, to be there waiting, carefully walking along the rim of the pond in search of his breakfast. Sometimes he is so still he goes unnoticed to those with an inexperienced eye, his shadowed profile camouflaged by the trees, cattails and rippling water. Even as I search the horizon for his familiar presence, it often takes patience to see him among the reeds.

He stands at the edge of the shoreline. His movements are awkward, yet delicate and purposeful. His head angled sharply downward, each shift in the Great Blue Heron’s position is carefully calculated so that he will go undetected by the fish just below the water’s surface. His long, spindly legs sometimes stop mid-stride as he holds his position for what seems an eternity before slowly continuing onward.

The Great Blue Heron (Ardea herodias) is majestic and regal in appearance and is the largest in the North American heron family. Despite being an average of five feet tall with an impressive six-foot wingspan, the Great Blue Heron weighs only a slight five pounds. With a long and slender frame the heron is crowned with a thick, pointed bill and keen eyes masked with black wispy plumes that stretch past the back of his narrow, white head, resembling a thick brow. As you travel down his lanky body, his neck and chest are adorned with plumes of feathers that resemble fringe and can often look unkempt when he’s at rest. His deep blue-grey body sits atop long, greenish-brown legs trimmed with deep brown feathers. I am often reminded of a butler standing at attention when I come across his upright stature and grace.

Despite his slow movements when searching the water for prey, the Great Blue Heron is an efficient hunter. His attack is fast, swift and deliberate, darting deep below the water’s surface to spear his dinner. While fish constitute the vast majority of the heron’s diet, they are also known to eat mice, insects and other small mammals or invertebrates such as frogs and lizards. Since the heron swallows its catch whole, it is not unheard of for a heron to choke to death due to its overzealous appetite and the occasional attempt to swallow a fish too large for its slender neck.

When in flight, the Great Blue Heron is hard to miss. They fly with great purpose and power, their necks curved into an elegant S-shape resting on their backs. With wings gracefully outstretched, the white plumage underneath easily visible and legs daintily trailing behind, the heron glides through the sky with great command and is quite a sight to behold.

Living primarily in wetland areas which provide suitable habitat as well as an abundance of fish and marine life, the Great Blue Heron is also known to frequent both salt- and fresh-water coastlines, ponds, lakes, rivers and even grasslands or agricultural areas. It is also not uncommon for them to “poach” ornamental carp or other decorative fish from backyard landscapes as well, so don’t be surprised if you see one perched on the edge of your garden resembling a statue as he looks for a meal. 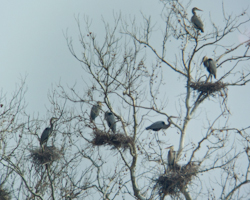 While found throughout the entire United States as well as coastal areas up and down the East Coast from Maine to the very southernmost points of Florida, over half of the East Coast’s Great Blue Heron population resides within the Chesapeake Bay region due to its large number of tributaries, wetlands and waterways. Herons roost in large colonies in nests made of twigs and sticks that are typically situated high off the ground in trees, but occasionally they will also nest closer to the ground, if necessary. Most herons choose to live in these colonies, or “rookeries”, but occasionally a breeding pair will choose to roost in a solitary location separate from the others, though this is not typical.

Northern Virginia is blessed to have several large Great Blue Heron rookeries right here in Loudoun County – with one located near White’s Ferry just south of the ferry landing and another visible from Loudoun County Parkway and Route 7 in Ashburn.

The Great Blue Heron will lay three to seven eggs sometime during late March and early April, and the eggs will incubate for approximately 28 days. Once the hatchlings arrive, they are fed regurgitated food and eventually graduate to fish brought back to the nest. A thriving Great Blue Heron rookery is an active, “chatty” community during the spring months and can be heard from quite a distance away.

The Great Blue Heron can live as long as fifteen years, given ideal living conditions. Many environmental factors can impact this number and can also have a dramatic effect on the health of an entire rookery as well. While the species’ numbers have remained relatively stable, with the issues of plumage hunting and insecticides impacting other heron species more dramatically than the Great Blue Heron, they are still impacted by environmental disturbances such as habitat destruction, polluted waters and disruption of the nesting rookeries. This is often the case in areas of new development where noise and traffic can cause birds to abandon the rookery in search of a more tranquil nesting location, often leaving nests and eggs midincubation. Fireworks and road traffic are perfect examples of this type of disturbance.

The Great Blue Heron is also impacted by other man-made pollutants and hazards. One such example is monofilament – or fishing line – and hooks cast aside after fishing. The heron, and many other animal species, suffer horrific and often life-threatening injuries or deformities when they become ensnared in the lines, unable to free themselves. Lost limbs, deep lacerations and even death have occurred to both herons and other wildlife due to monofilament injuries or the swallowing of fish hooks. Trash in general can also pose a serious threat as curious animals find themselves cut by a discarded soda can, or their head stuck inside a bottle or jar. By keeping our waterways clear of trash and debris we prevent these beautiful birds, and other wildlife, from becoming unnecessary victims to our carelessness.

It is no accident that the Loudoun Wildlife Conservancy chose the Great Blue Heron as its symbol. This elegant, easily recognizable bird graces everything from our letterhead to our website to our newsletter and serves as a constant reminder of the importance of continued habitat preservation and restoration in our county. With continued efforts to clean up our environment and preserve much needed habitat, the Great Blue Heron will hopefully always glide over our landscape and be an important presence in Loudoun County.