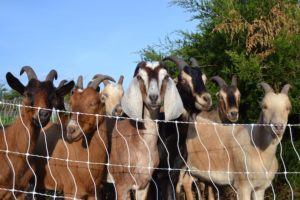 As spring rolls in, the emergence of the Brown Marmorated Stink Bugs remind us how a non-native species can overpopulate an area and wreak havoc. Their damage to agricultural crops and profit margins, as well as their persistence in aggravating homeowners, land them at the forefront of our minds, not to mention porches, sinks, dashboards and gardens – you name it.

Non-native plant species with similarly invasive habits, however, are less likely to come up during the average dinner conversation in our region. Few outside of the landscaping, forestry and conservation businesses know Kudzu as “the vine that ate the south,” or that native trees and rare plants are suffering behind those fragrant Japanese honeysuckle vines. But shepherds leading herds of goats on prescribed grazing jobs may make “invasive weed” conversations mainstream.

Last summer, in their fifth year of business, a Maryland-based company close to our hearts, Eco-Goats, made front-page news when its herd was tasked with clearing invasive and harmful plants, such as Poison Ivy, from Congressional Cemetery in historic southwest Washington, D.C. While managed grazing has been used for brush control and land clearing for centuries, the practice is popping up with more frequency today, as natural parks, historic properties and homeowners seek out chemical-free alternatives for managing problem vegetation.

Over the last year at Willowsford Farm, we’ve raised our own small herd of goats, accustomed them to travel, taught them to stay inside electric fencing, and have watched how voraciously they tackle Autumn Olive, Japanese Honeysuckle and Poison Ivy. With a few small jobs under their bellies, they are entering the 2014 grazing season ripe and ready to deploy around town and within the farm, Willowsford Conservancy and community systems to maintain clean, walkable woods and eco-systems. For most of June, they’ll be tackling Japanese Stiltgrass, Mile-A-Minute and various brambles at Morven Park in Leesburg, Va.

In addition to watching these goats defoliate, chew their cuds and intercept seed banks, we’ve noticed the magnetic force the herd possesses in terms of starting conversations, with children especially, and in attracting volunteers to farm, park and garden projects. Last summer, several of our goats participated in farm-based summer camp at the Arcadia Center for Sustainable Food and Agriculture. They have spent much of their spring season educating students in D.C. Public Schools thanks to a beautiful partnership with DC Greens and their Growing Green Teachers programming for 2014. They’ll be returning to Arcadia this summer for more summer camp fun.