Worried About Insects on Your Milkweeds?

One of the critical factors in the Monarch Butterfly’s struggle to survive is an abundance of plentiful, pesticide-free milkweed (Asclepias spp.) on which to lay eggs. But Monarchs are not alone in their use of this beautiful plant family. 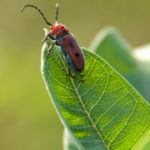 If you observe your milkweed plants carefully, you will undoubtedly notice some colorful insects on the leaves and stems. The most common of these are the large Milkweed Bugs (Oncopeltus faciatus), Milkweed Leaf Beetles (Labidomera clivicollis), and Milkweed Aphids (Aphis nerii). As their common names imply, these insects feed on milkweed seed and plant juices thereby accumulating toxic glycosides in their bodies that protect them from predators.

Brightly colored Milkweed Bugs and Leaf Beetles use the same orange and black optical warning that Monarchs use to discourage predators. The little yellow aphids are not quite predator-proof and their numbers are kept in check by small wasps and ladybug beetles. 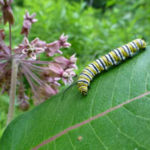 None of these creatures does serious damage to the plants or to the Monarch caterpillars, and are nothing to be concerned about. So why not leave them alone and see what happens? If you feel that your plants are being stressed by an unusually large insect population, just use a small brush to knock the insects off or shoot a strong water stream on them to wash them away. If using the water method, do it first thing in the morning when the sun can dry the leaves quickly to keep them healthy. Research shows that such mechanical methods are as effective as any pesticide and will not poison the plants for Monarch caterpillars as systemic chemical pesticides do. Be aware, however, when using these otherwise harmless methods, you may be knocking off Monarch eggs and small larvae. So be careful with hose or brush.

Whatever you do, do NOT use chemical pesticides. Neonicotinoids, the most common chemical pesticides in use today, can persist in the soil for 500 days or more, invading all parts of the plant. Studies show that after only one or two applications, plants grown in chemically treated soil can produce toxic leaves, stems, pollen, nectar, and transpiration droplets – everything an insect might use – for more than two growing seasons. Monarch caterpillars who try to live and grow on treated plants are doomed.

Use of pesticides kills not only the Monarchs, but also other valuable insects and pollinators, including honey bees. Extensive research has indicated such a strong connection between the use of these pesticides and Honey Bee Colony Collapse Disorder (CCD) that several European countries, including France, Germany, and Italy, have restricted the use of agricultural neonicotinoids. And according to entomologist James Frazier of Penn State University, the amount of neonicotinoids used in homeowner products for backyard plants is 40 times greater than anything allowable in agricultural systems.

Now THAT’s something to be worried about.