Bringing Back the Monarch, Keeping the Magic Alive

Monarch butterflies, they’re our charismatic fliers, and our most recognizable butterfly. They’re the species that when asked, everyone knows the butterfly we’re talking about. We’ve been touched by them as children. We’ve enjoyed seeing them flutter through our neighborhoods in the summer. They are the long distance fliers that in the fall make an epic mass migration traveling as many as 5,000 miles from Canada and across the United States to a tiny mountain area in Central Mexico. 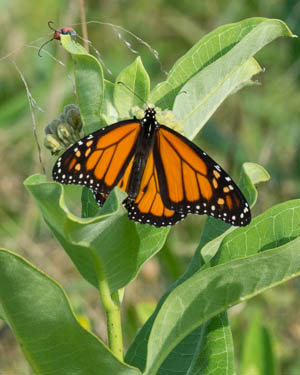 Additionally, adult Monarchs need nectar. They can get nectar from a range of plants through the summer, but as we move into fall and they head south on their great migration, they especially need our native fall nectar plants like goldenrod and asters. They need these plants to not only make the journey to Mexico, but also to build up the fat they need to make it through winter and start the journey northward in spring.

The third thing Monarchs need is the overwintering grounds in Mexico. The place they migrate to is a tiny mountain sanctuary near Angangueo, Mexico, where 216 square miles of forest has been established as the Monarch Butterfly Biosphere Reserve. The reserve is half the size of Loudoun County. Here, Monarchs congregate to overwinter together and ultimately occupy only a few acres of forest within the reserve.

The Plight of the Monarch

In spite of their majesty, the Monarchs’ great mass migration is imperiled. Their numbers have been on a steady decline for the past 15 years. The main culprits: loss of milkweed and nectar plants due to development, use of “Round-up Ready” seed crops, drought through the Midwest and loss of forest in the Monarch sanctuaries due to illegal logging.

The graph on page three tells the story of decline. In Mexico each year, researchers go into the sanctuary and make population estimates. Because Monarchs congregate, they are not found throughout the sanctuaries, but clumped together by the millions in patches of the forest, linking legs as they hang in the trees to conserve energy. In past years, the aggregation of Monarchs has been as high as 20.97 hectares (52 acres). In these congregations, one would find 10 to 50 million Monarchs per hectare. So, in a boom year like 1996, the population was somewhere around 200 million to one billion Monarchs strong.

But look at the graph. What is happening to the population? 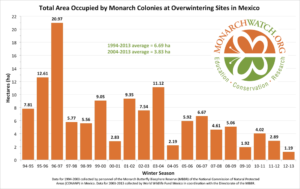 Sure, the numbers go up and down each year (and within that story there is a glimmer of hope that their numbers may recover again), but the overall population is moving in a stair-step pattern down, with five-year averages continuously decreasing:

This year, the 2012 population is estimated to be less than two hectares worth of Monarch, and researchers estimate the population of Monarchs that reached Mexico to be approximately 80 million.

What does this say for the future of Monarchs? As a species, they probably won’t go extinct. There are small populations that breed year round in Florida, South Carolina, Arizona, California and along the Gulf Coast. There are even Monarchs in New Zealand, Peru, Spain and other countries, but the great migration and magnificent numbers could very well end.

The majority of Monarchs migrate through the Midwest. However, continued drought, the increased use of “Round-up Ready” seed crops, and accompanying use of herbicides prevalent in the Midwest, took a toll on milkweed and nectar plants. The impact on Monarchs breeding in and migrating through the Midwest was severe. Last fall, citizens like you and me posted their Monarch sightings to Journey North. In comparing sightings from 2011 to 2012, we see Monarchs did not come through the Midwest in the same numbers as they have in the past. Instead, Monarchs coming from the East Coast were a higher than usual percentage of the population, and could possibly be the majority that made it to Mexico. That makes habitat in our area and along our migration routes that much more important.

As you read this article, Monarch butterflies have already left Mexico and are starting their journey northward. They are laying eggs on milkweed plants in Texas and other points across the United States, and the first generation of 2013 is starting to emerge. Here in Loudoun, we may see Monarchs as early as May or June, but most of us will see them in mid-July.

Hope for the Future?

From a habitat perspective, the deck is stacked against Monarchs, but insects are made for bad times. You saw in the population graph their ability to rebound. In 2009, their population was just 1.92 hectares, but the next year, it reached 4.02 hectares. Insects have the capacity to rebound if the habitat and weather conditions are there to support them.

A female Monarch can lay hundreds of eggs in her lifetime. Only about 10 percent of her young will survive. But even if she lives in a time when the population is low, if there are milkweed and nectar plants when she needs them, she and her sisters could rebuild the population—but habitat must be there.

And that simple fact—that this migration happens through our front yards and back yards, along our roadsides and through our open spaces—means this is a problem we can help solve. Habitat for Monarchs, which is also habitat for so many other species, is habitat that can be created in places we walk through and drive by every day. We don’t have to go somewhere else to make a difference. We don’t need special degrees or training. All we need is to plant plants and manage wild areas differently.

The Solution—It’s All Around Us

This year, we launched our Monarch butterfly campaign. Our goal is to reach 2,013 people through educational programs and outreach efforts, and to work with people across Loudoun to plant Monarch Waystations at homes, schools, churches and businesses. As part of this, we also set a target of raising and releasing 2,013 Monarchs this summer. After all, there’s nothing more magical than watching a Monarch caterpillar found in your garden grow, develop, transform and finally sit on your finger, observe the world with new eyes and take flight for the first time. We will also create connections in Mexico through programs like the Journey South symbolic migration, and we’ll lay the groundwork to keep this campaign going into future years.

Ultimately, we look forward to working with the Virginia Department of Transportation, Dominion Power and other organizations that manage large tracts of land and roadsides to manage those rights of ways differently by cutting down on mowing and herbicides. This also saves money in the process.

What Can You Do?

Look at your garden, your school, your church or place of work with the eyes of a butterfly. Plant some milkweeds and nectar plants and certify that space as a Monarch Waystation. A waystation can be as small as a container garden, as large as a field or power-line cut, or anything in between.

We’ve worked with several local nurseries, which stock native, pesticide-free milkweed and nectar plants starting in April. Visit one of these nurseries, and you’ll have the plants you need to get started. If you are a current member with Loudoun Wildlife Conservancy, you will receive a 10 percent discount at these nurseries just by showing your membership card. If your membership has expired, renew today and we’ll send you your card. To see the participating nurseries, click here.

Visit our website to sign up for special announcements and updates on our Monarch campaign, and to download tip sheets and fun activities posted on the site. Let’s keep the magic of the Monarchs alive.