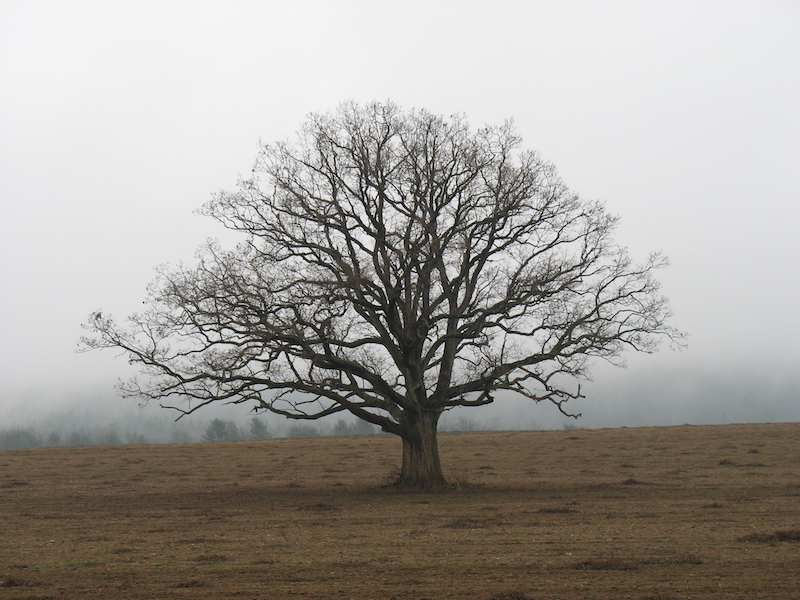 With the death of the American Chestnut in the early 1900s, the White Oak rose to prominence as America’s most valuable tree. This newfound value, however, was not in its wood—that fact had been established when the first colonists settled in this country—but rather as the primary source of food and shelter for America’s forest wildlife. No other tree in North America is known to support the diversity of wildlife than our eastern White Oak. Without its acorns, leaves, wood, and root system, the temperate forest of eastern North America would be a vastly different landscape than the one we know today.

All oaks belong to the genus Quercus, a large group of trees comprising nearly 600 species worldwide. In eastern North America, the White Oak (Quercus alba) is just one of approximately 50 different oak species. These oaks, like all oaks, can be broken down into two major taxonomic groups: the white oaks and the red oaks. The white oak group is characterized by rounded leaf lobes, sweet acorns that mature in one year, and heartwood-containing blocked vessels that make the wood impervious to liquids—a quality used in cooperage and one that has endeared these trees to the wine and spirits industry worldwide. It includes not just the White Oak but also the Chestnut, Swamp, Post, and Bur Oaks, to name just a few.

Red oaks, on the other hand, sport leaves with pointed lobes, bitter acorns that take two years to mature, and heartwood-containing open vessels that allow them to take in liquids, making them unfit for production of casks to hold the rum and whiskey that drove early American commerce. The red oaks include the Northern Red, Southern Red, Scarlet Oak, Northern Pin, Willow, and Shingle Oaks (whose quality of splitting readily made it ideal for shingles). Among all the oaks, the White Oak has always been considered second to none. The use of the White Oak literally helped drive the economic forces that built America in the early years. Its wood stoked our fires and kept us warm. The tannins from its bark were used to cure our leather. The wood was made into the charcoal that smelt the iron that drove our industrialization to a modern society. More important, we used the wood to build our fences, houses, and towns. Even the world’s mightiest navy was built from the wood of the White Oak. 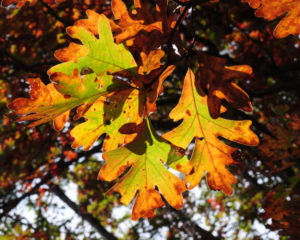 White Oaks are majestic trees. Their scaly bark is a light grey—nearly “white”—making them stand out from the grey trees of the forest. The White Oak’s leaves with their smooth wavy lines create a verdant canopy in summer and give way to subdued reds of fall that calm the soul. But it is perhaps their massive branches that are so spectacular. They strike out 90 degrees from the trunk and create a beautiful crown that extends far beyond the trunk. Wider than tall, White Oaks cast ample shade beneath them. Many a lover’s picnic has been held in the cool shade of a White Oak. Before our eastern forests were denuded from the landscape to support the growing demand for lumber in the latter half of the 19th century, it wasn’t uncommon to find White Oak trees standing more than 100 feet tall with trunks 6 to 7 feet wide. One large White Oak cut down in its prime in West Virginia measured 145 feet tall and nearly 10 feet wide at its base. It was so large that in order to move it off the hillside it had to be split into quarters using charges of dynamite. Today it’s hard to imagine trees that large, yet there are still many impressive White Oaks to be found around Loudoun County. Some of the best sites to see these ancient oaks are Loudoun’s older towns, including Middleburg, Waterford, Purcellville, and Hillsboro, where White Oaks have stood in grandeur for hundreds of years.

For the naturalist, perhaps the most beautiful characteristic of the White Oaks is not the allure of their looks but rather the fact that they play such an ecologically important role in our forests. Everything about the White Oak is essential for forest life. The nooks and crannies of its bark harbors spiders and other insects whose lives then support birds such as warblers, nuthatches, and kinglets. A variety of beetles species live in the oaks as well. They invade the wood of the trunk and branches, and though they may ultimately kill the tree, decades might pass before this occurs. In the meantime, several woodpecker species will drill into the wood, plucking forth beetle larvae to feed themselves and their young. Holes left by woodpeckers then become sanctuaries for squirrels and screech owls and a host of other animals. 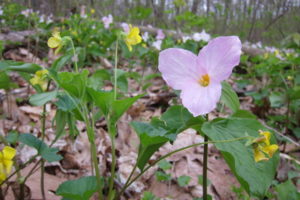 Oak leaves provide a bounty of rich carbohydrates for countless insects and other herbivores. According to Douglas Tallamay in his book Bringing Nature Home, oaks support up to 534 Lepidoptera species and counting. Close inspection of the leaves reveals the caterpillars of beautiful Io Moths, Polyphemus Moths, hairstreak butterflies, and many other Lepidopteran species that grace our gardens and fields. Galls (fat, round growths on the leaves and branches) are created by the larvae of cynipid wasps and a few other insects. Each distinct-looking gall is indicative of a different insect species. Even when the leaves are not providing food for the herbivorous hordes, they can provide shelter and warmth. Grey squirrels and fox squirrels build their leafy drays in the confines of their branches or the hollows of their trunks. Flying squirrels, too, find comfort hidden within the fortress of a White Oak’s wood. It’s not just Blue Jays and other small birds who build their nests in the shelter of the White Oak’s branches. Even Red-tailed Hawks favor building their large stick nests in these oaks, in part because the openness of their branches enables a bird with a four-foot wingspan to easily navigate through their branches. Few other trees allow such accessibility.

Let’s not forget our reptiles and amphibians. In spring, male blacksnakes often congregate high up in the branches of rotten oaks to play courtship to the females. Females will then often lay their eggs in the very same tree, utilizing the soft, rotten wood pulp of the tree’s interior to provide the proper humidity and warmth to hatch the eggs 70 days later. Salamanders also utilize the tree, seeking out worms and other small invertebrates hiding among the leaf litter or living soil beneath the outcast branches. And what would a warm late spring night be without the sweet melodic calls of grey tree frogs in the upper canopy of white oaks and other forest trees? Their songs advertise their territory with a lullaby-like quality, and as they call, it is easy to drift into a deep sleep upon their chorus. 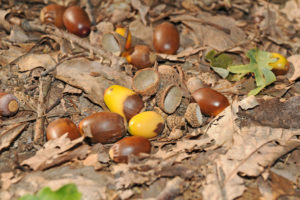 An oak’s greatest and most unpredictable asset is its acorns. Acorns, along with the other nuts of forest trees, are called mast. The amount of mast often varies from year to year and from region to region. Oaks can have years in which they produce a tremendous mast crop, only to be followed by years with spartan production. Acorns, as it turns out, are rich in nutrients, carbohydrates, and minerals that attract a rich array of animals. They form an important part of the fall diet of jays, woodpeckers, ducks, turkeys, squirrels, mice, chipmunks, wild boar, bears, and deer. Insects also favor acorns. Many of them lay their eggs inside acorns where their larva feed and mature to emerge as adults the following spring. Acorn weevils, in particular, with their comical, big eyes and long snouts, cannot live without them. Because acorns don’t spoil readily and will often last for months or years, they are frequently cached by the tens of thousands, if not millions, by birds and rodents to be eaten later. To counter this onslaught, oaks employ several unique methods. One is to overwhelm the enemy by sheer numbers. Oaks can produce prodigious numbers of acorns amounting to tens of thousands per tree. Given that an oak can live 300 years, one or two of its acorns will undoubtedly survive to germinate, grow, and replace oaks lost through the attritions of time. A second, more devious, technique is to make the bounty unreliable. By interspersing years of heavy production with years of no mast production, animals cannot bolster their populations to take full advantage of the oak’s seeds. An oak’s final trick is to deploy unsavory compounds called tannins in their acorns (and leaves) that make them unpalatable. While not perfect, these methods have ensured the survival of oaks for millions of years and, hopefully, will continue to do so. The very nature of our forests depends upon these trees. If there is just one thing you could do to help nature, your best choice would be that of planting a White Oak and letting nature smile upon your action.