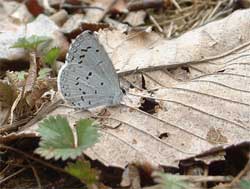 The Spring Azure is a small butterfly, only about an inch in width. The underside of the wings is a pale dusty blue with grayish spots while the topside is a vibrant purplish blue.  It generally rests with its wings closed and has a rather erratic flight pattern.

In terms of habitat, this tiny butterfly can be found in edges of wooded areas as well as wetlands, fields and gardens.  They are easily attracted to gardens and yards as their host plants are ones we commonly use for landscaping:  dogwood (Cornus), viburnum (Viburnum), New Jersey tea (Ceanothus), blueberry (Vaccinium), and meadowsweet (Spiraea salicifolia).  They will nectar on a wide range of flowers but especially enjoy dogbane, privet, New Jersey tea, blackberry, and common milkweed.  If you plant a combination of host and nectar plants, these beautiful butterflies will likely visit your garden.

Spring Azures overwinter in the pupal form, safe inside their chrysalis.  As spring starts up, check your host plants for the tiny caterpillars.  The caterpillars are greenish or pinkish with a dark stripe on the back.  The Spring Azure caterpillars feed on flowers and fruits and are tended by ants.  Don’t worry though, they won’t eat enough to do any damage but will turn into flying azure jewels that will brighten your spring.