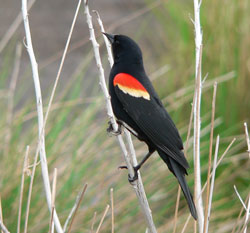 A friend of mine recently recalled her first close encounter with a Red-winged Blackbird in her youth. While visiting the Eastern Shore with her family, she was drawn to the remarkable sound of a bird singing its heart out somewhere in the tall reeds. She made her way into the thick and startled a beautiful black bird with bright red wing patches that flew away quickly. It was a clear memory of a moment that has stayed with her for years.

Distinctive sound and striking appearance are the hallmarks of this abundant North American bird. The Red-winged Blackbird is a boldly colored medium-sized bird (slightly smaller than a Robin). The male of the species is most easily recognized: a glossy black bird with shoulder patches of bright red underlined with yellow. The females are less intensely colored, with streaks of light and dark brown, a lighter color on the breast, and a white eyebrow. The more subdued coloring of the female may be an adaptation that helps hide her during the nesting season.  The appearance of this species may vary slightly depending on their location.

Red-winged Blackbirds are found throughout the United States, Mexico, and southern Canada. In the northern ranges they may migrate further south for the winter months, but those in the southern part of the continent are permanent residents.

While these birds prefer wetlands for feeding and nesting habitat, they are very adaptable and will also nest in fields and grassy areas, in meadows, and near streams. Nests are built close to the ground and woven into upright vegetation such as phragmites or cattails. The female will lay 3 or 4 pale blue eggs with black or brown markings that she will incubate for 12 days.  Males are fierce defenders of nesting and feeding territories and will attack even humans who stray too close to the nest. Each male will have up to 15 female mating partners, and they will group their nests in close proximity to each other. This group nesting helps guard against predators by increasing the number of alert parents on watch. Nests are in danger of being raided by snakes or raccoons. The pair will raise two or three broods a season, building a new nest for each new clutch of eggs.

Primarily seed eaters, Red- winged Blackbirds will also eat insects during the nesting season, especially aquatic insects like caddisflies, damsel flies, and mayflies as they emerge from their larval aquatic stage.  Three quarters of their diet is seeds and grains.

You can watch for this beautiful bird in many areas in Loudoun County, but two of my favorite locations to see them are at the Blue Ridge Center for Environmental Stewardship and Banshee Reeks Nature Preserve. If you stop and listen you will hear the distinctive three-syllable call of the male as described in this love song from the Civil War era written by W. W. Fosdick:

When the blackbird in the Spring,
‘Neath the willow tree,
Sat and rock’d, I heard him sing,
Singing Aura Lea.