The most exciting part of any zoo visit for our family is the trip to the otter habitat.  We watch for what seems like hours as they slip and slide, roll and tumble around their enclosure to the delight of those lucky enough to see the show.  It’s almost as though they know we’re watching, making sure to provide unending comedic antics and a heavy dose of cuteness for their audience. 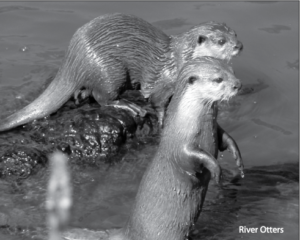 Otters are not just adorable, though, they are also quite remarkable animals.  They belong to the family Mustelidae, making them cousins to the weasel, badger, ferret, and mink. There are 13 species of otter inhabiting five of the world’s continents, but most of us are only familiar with the two most commonly found here in the United States: the Sea Otter and the North American River Otter.  Few have had the pleasure of knowing their international cousins and some of the lesser-known species of otter, which include the African Clawless, Asian Small-Clawed, Congo Clawless, Marine, Neotropical, South American River, Eurasian, Spotted-Necked, Hairy-Nosed, Smooth-Coated, and Giant Otter.  Until fairly recently, there had also been a 14th species known as Maxwell’s Otter, which is now presumed extinct following the drainage of their habitat in Iraq.

Otters fall into two rather distinct categories: river otters and sea/marine otters.  They can be distinguished fairly easily by observing their behavior and physical traits.  River otters tend to swim belly-down with most of their lower body submerged underwater, while sea otters often swim belly-up and float high on the water’s surface.  River otters are also more adept at land travel, whereas their sea-faring cousins tend to leave the water less frequently and are more awkward on their feet.  This preference for land vs. sea is also apparent when it comes to sleeping arrangements.  A river otter enjoys playing and hunting in the water but will retreat to a dry den for sleep, while the sea otter will snooze as he floats, often rolling himself in kelp to keep from drifting with the currents.

All otters sport a thick, heavy tail and dense, velvety fur that protects them from frigid water temperatures.  River otters have smaller webbed hind paws that are circular in shape, while the sea otter has fully webbed paws with longer outer toes that make it hard to maneuver on dry land.  Naturally, there are differences in dietary preference, based on what is available to them in their habitat.  Since otters are carnivores, river otters tend to prefer fish, snails, and clams, while their sea-faring counterparts consume crabs, sea urchins, and abalone or shellfish.  River otters have also been known to eat small reptiles, amphibians, birds, and insects.

Otters are highly intelligent, and sea otters are one of the few mammals to use tools to aid in the consumption of their meal.  After bringing their catch to the surface, the sea otter will often place a stone on his belly and use a second stone or other heavy object to pound the shellfish until the shell is compromised, enabling the removal of its contents.  The tool preference can vary from otter to otter and is often passed from mother to pup.  The otter collects the tool from the sea floor, tucking it into a deep fold of skin under the arm as they carry their prey to the surface.  Food stealing is another common practice, particularly among sea otters.  The male otter will often kidnap a young pup, holding it hostage until the female relinquishes some of her food to him.  The pup is only released once the handoff has been made.

Habitat is critical to the preservation and proliferation of otters, and loss of habitat is one of the biggest threats to otters worldwide.  Highly sensitive to tainted habitat, the river otter has already disappeared from nine states as a result of pollution and habitat destruction.  Sea otter habitat is also impacted by pollution, as well as commercial fishing and mass devastation of habitat from oil spills.

River otters, such as the North American River Otter here in Loudoun County, frequent lakes, ponds, coastal marshes, and estuaries.  They will frequently “borrow” the dens and burrows of woodchucks, beavers, and muskrats. River otters can be found in most states across the country while Sea Otters inhabit the rocky, coastal areas of Northern California.

Otters are expert swimmers and divers.  They have ears that are specifically designed to enable deep dives, and their noses have a valve-like membrane that closes the nostril opening, making them watertight.  An otter can stay under water for several minutes and swim at an average speed of 7 miles per hour.

Communication between otters is done via chirps, chuckles, grunts, whistles, and screams and by marking their territory with scent.  They have a very playful disposition, but play is secondary to meeting basic needs such as nutrition and shelter.  Perhaps this is why otters in captivity are so playful compared to their wild cousins.

The life expectancy of an otter is approximately 15 years in the wild.  Otters have few natural enemies, particularly when they are in the water.  Young otters can fall prey to a variety of predators when on land including foxes, coyotes, and the larger birds of prey.  Most otter deaths are due to illegal hunting by humans, pollution of natural habitat, and habitat destruction.

Several varieties of otter are in serious danger, and four are currently listed as endangered, with their numbers on the decline.  These include the Marine Otter, South American River Otter, Hairy-Nosed Otter, and Giant Otter.  While the North American River Otter is in good shape, the Sea Otter is still listed as endangered, though fortunately its numbers have remained stable in recent years.

We are lucky to have these plucky critters right here in our neck of the woods.  Otters are actually quite shy, but if you keep a keen eye out while you’re hiking in wetlands or fly-fishing a local river, you might just get lucky and spot one taking a quick dunk or grabbing a fish dinner.