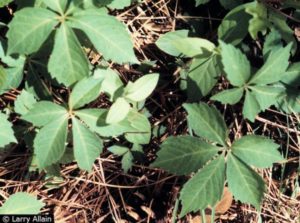 The Virginia Creeper, scientifically known as the Parthenocissus quinquefolia, is a five-leafed woody vine that provides an abundance of food for hundreds of insects, birds and other wildlife.  This green vine, which changes to a beautiful, purplish to bright red color in autumn, uses tendrils (slender, curling extensions) that have adhesive-like tips to rapidly attach themselves to structures, rough or smooth.

They have been found climbing as high up as 98 feet and are native to countries in the western hemisphere, including: Southeastern Canada and as far west as Manitoba, Canada; Eastern Mexico; Guatemala; the Eastern and Central parts of the United States and South Dakota, Utah and Texas.

During winter months, birds are not only attracted to the red leaves, but also to the bluish-black berries that the vine produces.  More than 35 species of birds enjoy eating the Virginia Creeper’s berries, including: thrushes, woodpeckers, warblers, vireos, mockingbirds and other songbirds.  While animals such as mice, skunks, chipmunks, squirrels, cattle and deer will munch on the leaves and stems of this vine, it is the insect class that relishes the plant.

The Virginia Creeper Sphinx Moth, the Achemon Sphinx moth and the Grapeleaf Skeletonizer use the plant as its larvae host. The female Virginia Creeper Sphinx Moth lays two to three eggs on the underside of the Virginia Creeper. In the fall the fully-grown caterpillars spin cocoons in the vine’s leaves.  The adult Grapeleaf Skeletonizer lays eggs in clusters on the leaves.  As the eggs hatch, the caterpillars begin eating the leaf tissue between the veins on the underside of the leaves.  The tougher veins are left behind, creating a net-like skeleton.  This destructive feeding process, also performed by Japanese Beetles, is called skeletonizing.

The berries of the Virginia Creeper are not poisonous to humans; however, they do contain oxalic acid, which when consumed will irritate your stomach and kidneys.  The sap of the plant also contains oxalate crystals and can cause skin irritation and rashes in some people.  Humans mostly use the plant for ornamental purposes, but it is also used to control soil erosion, to attract birds, and for a few medicinal purposes (the bark and twigs are made into cough syrup).

While the Virginia Creeper can be a beautiful lawn ornament, it can also harbor numerous species of insects, songbirds and wildlife.  However, it can rapidly overpopulate your yard, so be wary when planting.