As fall approaches many of us find the weather to be increasingly pleasant. We continue to spend time outdoors, and school starts for kids. Sports teams practice and families head to the pumpkin patches, fairs, picnics, and barbecues. Here they partake in treats such as kettle corn, ice cream, soda, apple cider, candy and other sweet treats. 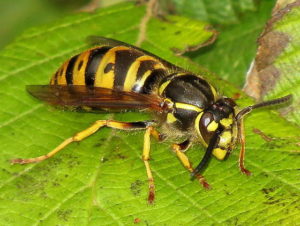 But we aren’t the only ones who enjoy these sugary foods. Yellowjackets (Vespula maculifrons) arrive as well, following their noses (or rather their antennae) and swoop in with a zigzag back-and-forth hover, landing on the delightful snacks. These insects are yellow with black banded markings on their abdomen. Unlike bees, they have very little fuzz and hair along their bodies. The intersection of our paths with theirs can often result in unpleasantness. While bees sting only once, and are reluctant to do so as they forage on flowers, yellowjackets and wasps can sting multiple times, and do so much more readily if they perceive a threat to themselves or their nest.

Last spring, the yellowjacket queen began her colony by building a small nest and laying the first brood of eggs. Some species of hornets and yellowjackets build large aerial nests out of chewed wood fiber. Others, including the Eastern Yellowjacket build underground or in hollow spaces such as logs. Many people unwittingly stumble into these underground nests, disturbing the colony which erupts in an angry swarm. The new queen forages for food for the carnivorous larvae, collecting caterpillars and other insects and pre-chewing them to feed to the young. As the first brood matures into sterile adult female workers, they expand the nest and continue to forage for more food for the continuing broods.

The adult yellowjackets feed on nectar and other sugar sources. As they bring insect food for the larvae, a mouth-to-mouth exchange occurs called trophallaxis. The larva receives the preconditioned meat, and in return secretes a sugary substance consumed by the worker. The workers collect many insects that are considered crop and garden pests by people, and so the yellowjackets are beneficial to us.

As the summer wears on, the number of workers in the colony reaches a maximum and the sugar secretions of the larvae ceases to satiate their hunger. The adult yellowjackets are nearing the end of their life-spans as well, and this makes them search for sugar sources more aggressively. This is why yellowjackets become increasingly troublesome toward the end of the summer and fall.

Avoiding yellowjackets can be difficult, since they like the same foods we do, and we both enjoy the outdoors. Here are a few tips for avoiding the painful stings. If you are going to be outside, working in your yard or hiking, wear long pants and closed toed shoes to avoid stings. White or light colored clothes are less attractive to yellowjackets than floral or other bright colors, like yellow. Wear gloves while gardening. Avoid putting on fragrant perfumes or lotions.

If having a picnic, try to keep sweet foods covered, or avoid them if possible. Cover trash cans with lids. If you see a lot of yellowjackets buzzing around, be careful, because you may be near a nest. If you encounter one of these insects, it is best to remain calm. Swatting or flicking at it can make it more alarmed. Calmly move away, and if one lands on you, use something to slide under the yellowjacket and carefully remove it.

As long as you pay attention and keep your cool while outside, you can avoid unfortunate interactions. It is important to remember that the insects do not want to harm you, they are just hungry. They do a lot of good by keeping down insect-pest populations, like flies and caterpillars, and that makes them valuable to have around.

The yellowjacket colonies produce new queens and males during the summer. As the weather cools, the mated queens find a safe spot to overwinter. The old queens, workers and males will die, and the cycle will begin again next spring.