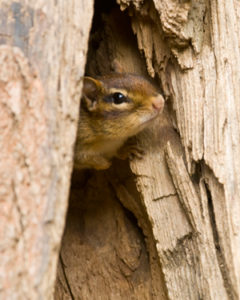 In the early spring, the little critters that weathered the winter months emerge from their slumber to greet the spring.

One of the most endearing of these small creatures is the chipmunk, who, unlike many of his fellow mammals, does not enter a state of slumber during the winter.

The chipmunk hunkers down in his network of burrows during the frigid season, subsisting from a cache of nuts and seeds all winter long! If that doesn’t create cabin fever, I don’t know what does!

The chipmunk emerges from his long seclusion for a much-needed stretch, and his mind turns to two things: food and romance.

The chipmunk can, after a 30-day pregnancy, produce a litter of two to eight young, which will live with the parents for 2 months before moving out on their own to prepare for their own winter experience.

There are over 25 species of chipmunk, and all but one, the Asian Siberian Chipmunk (Tamias sibiricus), live in North America, ranging all the way from Canada to Mexico. The chipmunk’s size spans from the petite 8.5 in. (nose to tail), 1.8 oz. Least Chipmunk (Tamias minimus) to the larger 11 in., 4.4 oz. Eastern Chipmunk (Tamias striatus).

The Eastern Chipmunk is the one most prevalent in our area, living for up to 3 years. It usually surfaces from its den in early spring, to feast upon all manner of nuts, bugs, and berries (specifically acorns), some of which it carries back to its den inside its cheek pouches. The Eastern Chipmunk can be defensive of its den, although only actively defending 50 ft. of its ½-acre territory, the area surrounding the den itself.

A close cousin to the squirrel, the chipmunk is defined by its reddish-brown fur and unique black and white facial and torso stripes. Another characteristic feature is the chipmunk trill, which sounds like a sharp bird-like chirp. This call is used to notify others of impending danger, as well as to attract a mate.

If you are trying to attract chipmunks, then your task should be quite simple! Chipmunks can live in any environment, from an alpine forest to a shrubby desert, where they consume anything from insects to nuts, seeds, and berries. Terrain with a heavy cover of rocks, underbrush, or logs provides an effective and attractive screen from predators, such as hawks, coyotes, or snakes.

Invasive or foreign species, such as house cats, are having a negative impact on the chipmunk, over-hunting this and other small mammals to, in some cases, dangerous degrees. So remember, keep your cats indoors!