It is summertime in Loudoun County, and there are many kinds of bees that we are likely to encounter if we venture outdoors.  There are some that we may not notice or know much about. By learning more about these bees, it is easier to feel comfortable around them, and appreciate their roles as pollinators.

Though many people lump all bees and wasps into the same category, there are many distinct groups of Hymenoptera (bees, ants, and wasps). Bees belong in the superfamily Apoidea. Wasps, hornets, and their relatives belong in the family Vespidae, and are much more aggressive and likely to sting you if disturbed. Most bees are docile if not bothered, and will not sting unless seriously provoked. We, and the bees, are best served when we observe them and do not interfere with their lives. Observation of these fascinating creatures can be very rewarding indeed.

As you may know, the biggest reason for protecting and caring about bees is pollination. European Honeybees are probably the most familiar pollinator, but there are other bees that are very important to pollination. Bumblebees and honeybees are eusocial insects, living in groups or colonies. There are also many native bees that are solitary bees.

In these species all the females are fertile, only associating with other bees to mate. They usually inhabit nests they construct themselves, sometimes nearby others in nesting sites. There are no workers, and typically they produce no wax or honey. They each collect pollen and nectar to deposit in the nest with an egg. Solitary bees and the more familiar bumblebees and honeybees are a large part of the local ecosystem in their roles as major plant pollinators.

If you have ever encountered a Carpenter bee near your deck or house, you will probably remember this large, loud bee as a potentially intimidating creature. Carpenter bees look like bumble bees, but are larger and darker in color. They also have less hair on their abdomen, so they look shinier and less fuzzy than the Bumbles.  The Eastern Carpenter bee (Xylocopa virginica) gets its name from the way it nests in wood. They can sometimes make a nuisance of themselves by boring into wooden fascia on houses.  However, they do not eat wood, so damage is usually cosmetic and not structural.

The adult bees overwinter in the hole they were born in, and emerge in the spring when the weather warms. The female chews a T-shaped tunnel and then patrols the surrounding area. The males also hover around looking for mates. The bees respond to movement, dive-bombing other insects that they perceive as rival males that venture too close. Their curiosity is often interpreted as aggression. This combined with their rather clumsy flying abilities can lead to some alarming experiences. 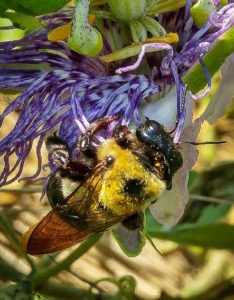 However, as is the case with all male bees, they do not have a stinger and are harmless. The females are usually too busy with collecting pollen and nest-making, but if captured they can deliver a painful sting. Once the nest is complete, the female create partitions and lays 1 – 20 eggs in with the pollen stores for the grubs to feed on when they emerge. After feeding, they pupate, and the adults break free in midsummer. They remain living in the hole where they will hibernate for the winter.

Many people allow bees to nest in or near their homes because they are important pollinators. However, if the bees are damaging valuable wood, there are some things a homeowner can do to solve the bee problem. Painted wood is less attractive to bees, and may dissuade them from starting a nest. If there is already an established nest, blocking the hole is not usually a good solution because of the bees’ preference to nest in or near their birthplace. Discouraged bees may bore their way out, or bore more holes nearby, which can cause more damage. A good solution is to provide the bees with an alternate nest site, such as a beam of soft wood.

The mining bees of the family Andrenidae are also important pollinators. In the early spring, the bees emerge from their burrows in the ground in search of pollen. A tiny individual I found while hiking in March was a solitary bee probably from the genus Andrena.  The female digs a hole in sandy soil and after mating lays an egg that will hatch and feed on the pollen she collected.

The Alfalfa Leafcutter bee (Megachile rotundata) is one of my personal favorites. Like the honeybee, it is a cultivated European species and an important pollinator of alfalfa and carrots. The bee gets its name, once again, from its nesting behavior. I noticed these bees’ activities in my yard before I ever saw them.

The female selects a small hole or crevice to serve as a nest site. She cuts circular pieces out of the edge of a leaf and uses them to create cells within her nest. The collected pollen goes in with one egg. The larvae feed on the pollen and pupate the next spring. The female bees are capable of stinging, and both males and females can use their strong leaf-cutting jaws for self-defense if squeezed or antagonized. These bees are managed for pollination where they are induced to nest in drinking straws or drilled holes.

Mason bees (Osmia spp.) are in the same family as leafcutter bees. They are also good pollinators of early fruit flowers in the spring, and are increasingly cultivated to augment the work of European Honeybees. Like the leafcutters, the female selects a small hole or cavity, then collects a provision of pollen. She lays one egg and then seals it off with mud, giving the bee its common name.

Sweat bees or halictid bees (Halictidae) are ones most people are probably familiar with. These small bees are attracted to the salt and moisture in human perspiration, and often will give a small sting when squeezed accidentally in the fold of an elbow or knee. Like other solitary bees, many sweat bees nest in the ground or in wood, and collect pollen, which they leave in the nest cavity to feed their larvae. Some sweat bees are eusocial or partially so with queens and workers.

Sweat bees can often be very beautiful, with striking metallic green hues. They are very valuable pollinators because many engage in a behavior called sonication or ”buzz pollination”. They contact the flower and use their flight muscles to vibrate it, stimulating the release of pollen. Blueberries and watermelon benefit from this tactic.

The European Honeybee (Apis mellifera) is an introduced species, and it is very important in the pollination of food crops. There are many debates and discussions regarding the roles of honeybees and other solitary bees as pollinators. Relying on a generalist honeybee to pollinate so many different plants opens us up to a weak spot. Honeybees are increasingly susceptible to things like Colony Collapse Disorder, which honeybee numbers are declining and the cause is uncertain. As the bees struggle, we struggle to solve the problem of food production. There are many ways in which native bees more effectively pollinate certain flowers.

Bumblebees and mining bees wake up earlier in the spring than honeybees, and some wake up earlier in the morning and stay up later in the evening as well. Also, honeybees recruit their sisters to only the best pollen and nectar sources, meaning crops may be abandoned. Solitary bees do not recruit, and so each bee has an equal likelihood of visiting the overlooked flowers. Varying body shape and pollen collecting methods allow different pollinators to take advantage of variations in flower shape or size. Some bees specialize, visiting only one type of flower and becoming very efficient at pollinating it. An example of this is the Squash bee (tribe Eucerini). This bee has developed special characteristics to accommodate the large pollen grains of squash plants.

Native bees are often overlooked, but they are vital to many plants and might be very important in crop pollination. Many solitary bees can benefit from your actions. They need nesting sites and flowers for foraging. Both of these can be provided by setting aside uncultivated areas of land. You can also plant a variety of nectar-producing plants so that something is always blooming throughout the season. Avoid using pesticides that bees carry back to the nest, for a bee-friendly lawn. Stream riparian buffers and hedgerows provide some of the best habitat for bees and all kinds of other organisms. You can also create artificial nest sites or provide raw materials by drilling holes in wood or leaving reeds standing or bundled.