As I sit on my front steps during the summer, I often hear “buzzz, zzzzzz, zzzzz” throughout our garden.  And with that buzz, I often see a bumblebee, the yellow and black fuzzy bees we all know so well, foraging for nectar to take back to its nest.  But how did this bee come to be?  What kind of life does it lead? As I asked myself these questions, I turned to a really great book called Humblebee Bumblebee by Brian Griffin and as I read I became engrossed by what I read.

Here’s what I learned: During the early spring days of March and April, as the earth is warmed by the sun, the earth in turn warms a bumblebee queen sleeping deep in her underground hibernaculum.  As she warms she awakens and begins to dig her way out of the tunnel she dug the fall before as she went into hibernation.  She emerges hungry and, after warming her body in the sun, goes off in search of nectar to satisfy her hunger.

She is joined at the nectar plants by other bumblebee queens preparing to engage in restoring the life of their colony. As Brian Griffin writes, “Each of them entirely alone in the world, all of them bearing the promise of a new bumblebee colony and the future of their race…..These huge early bees are the foundress queens who are charged by Mother Nature with establishing a new colony of bumblebees.  The entire future of the bumblebee race depends on the success of these gravid queens.  Every other member of their colony of the previous summer perished with the onset of winter.”

As I sit on my front steps, I see one of these queens and understand the weight that is upon her, and it’s simply inspiring.  But to her it is just what she is meant to do, and she goes about her business, instinctually performing the tasks to build the groundwork and start a new colony. And so, after she satisfies her hunger, this queen bee goes in search of a nest site.  This is a dangerous time for her because, being the end of winter, there are a lot of hungry birds and spiders in search of a meal.  She may take a few weeks to find the proper site, and at night she will sleep on a twig.  The site she picks may be an abandoned mouse nest or bird nest. It will be secluded and protected from the elements and already filled with warm insulating material.

After she has selected her nest, the queen will make a series of locator flights in which she will fly in circles of increasing diameter, keeping her head tilted towards the nest as she enlarges the circle.  This will give her the reference points she needs to find the nest again after her foraging trips. Once she has her bearings, she will go inside the nest and use her own body heat to warm and dry the nest material.  During this time she will also make wax and form it into shingles that she will craft into a honey pot, which she will fill with honey that she also produces.  She will sip from this honey pot as she broods her young, since she will not be able to leave the nest for long periods during that time. 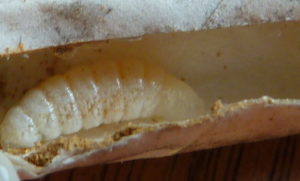 With the honey pot ready and filled, she will then use her wax to build an egg cup.  During the previous fall, before the males and other members of the colony died, our queen mated with the males and stored semen in a special organ where she kept it safe through the winter until she was ready.  Now she fertilizes and lays eight eggs in her egg cup.  She covers it with a wax cap, and in 4 days the eggs hatch into larvae.  She opens the cup as needed and feeds the larvae, and as they grow larger she builds and rebuilds their egg cup to accommodate their size.

She spends the majority of her time lying on the egg cup to keep her young warm as they develop, and leaves the nest only once in awhile to forage for nectar. She works diligently to keep the honey pot full in preparation for the next stage, but throughout these days she spends increasingly more time in the nest, brooding her developing young.

After 7 days the larvae spin cocoons and begin to pupate.  This is a critical time, and the queen knows it.  She rarely leaves the nest and instead lies on the pupae, spreading her body as broadly as possible, grasping the pupae with her legs to maintain contact and keep them warm.  Day and night she broods them, sipping from the honey pot for her own nourishment.

Twenty-two days after the eggs were laid, the young bees emerge.  This first brood will be all female, since females are the workers, and the colony needs to be established.  These first females born will be smaller than those born after the colony is further established, because those will have more workers tending to them and food will be more plentiful.

In these early days, however, tending to the first brood is all up to the queen.  For the first few days, the young will clean and dry their bodies and wings until they are strong enough to fly. As they go forth from the nest, they will begin to find nectar sources and will bring back nectar, making honey to fill the honey pot.  The queen, meanwhile, builds the next egg cup and the second brood is started.  Used egg cups will be used to store honey for future broods, and so the colony grows.

Summer presses on and when the time is right, the queen lays eggs that are specifically male as well as some special extra-large eggs that will develop into the next generation of queens.  Males will fly off to other colonies in search of newly hatched queens and they will mate.

At the end of the season, as our valiant tired queen passes on, the new young queens will say adieu to their colonies that will also pass with the onset of winter, and will dig their hibernacula and begin the process again.

Things You Can Do: