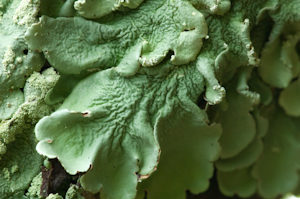 Lichens belong to a group of plants called Thallophytes, which lack roots. Water and minerals are absorbed by lichens from the moisture in the air and from ground water. The lichen cannot control what or how much it absorbs, which can result in the photosynthesizing unit of the plant becoming poisoned by harmful toxins found in the atmosphere.

Sulfur dioxide, the main component in air pollution, is one particularly harmful toxin. Sulfur dioxide is a colorless, poisonous gas that forms naturally from volcanic activity, from the decay of organic matter, and from burning fossil fuels. It is also released into the air by oil refineries, metal smelters, factories, and power plants that burn coal and oil. When sulfur dioxide dissolves in water droplets it forms acid rain, which can harm and kill wildlife and damage buildings.

Lichens are often one of the first species in an ecosystem to suffer or die from air pollution. Therefore, scientists can use them as pollution indicators, estimating the amount of sulfur dioxide in the air by observing the number and type of lichens growing in a particular area. Lichens also absorb metals. By analyzing lichens that grow near factories and smelters, scientists can determine how much metallic pollutants are released.

Lichens can be found growing worldwide, taking over about eight percent of the Earth’s surface. It is believed that there are over 30,000 species of lichens on Earth. Lichens are very hardy organisms that thrive on any organic surface, such as bark, soil, stone, and other plants, in some of the harshest environments including Polar Regions, deserts, and high mountains. They survive by shutting down metabolically and becoming dormant. Lichens that are moist are able to absorb water for photosynthesis. When lichens are dry, they become dormant, or inactive. Lichens can survive many months in a dry state, because they grow very slowly. Most temperate-zone lichens grow only 0.1 to 0.2 inch per year, sometimes less. Lichens may live for hundreds and even thousands of years, because of their slow growth rate.

On the Arctic tundra, some lichens called reindeer moss grow into bushy, ankle-deep carpets and provide the main source of food for caribou and reindeer. Snails, sea slugs, lemmings, musk ox, and insects also eat lichens, as do Eskimo groups in the Arctic, which use the lichens in a traditional diet.

Lichens can benefit other plants by secreting an acid into the rocks they grow on, which breaks the rocks down and helps to create new soil, where other larger plants can grow. Lichens also break rocks down when they absorb water and other dust particles, which they hold against the rock surfaces that they grow on. Then the effect of freezing and thawing creates erosion.

One type of lichen called oak moss is used in Europe and North Africa to make a fixative for perfumes, aftershave lotions, and soap. The fixative prevents flower scents from fading too quickly. People in Germany and Central European countries use lichens to make holiday decorations.

Canary weed, another type of lichen, is used to make litmus, which is a substance used to determine if a solution is acidic or basic. Doctors have used lichens for 2,000 years to treat certain lung and skin disorders.

Lichens provide plants with richer soil, they provide animals with nourishment, and humans continually find uses for them that benefit the health of our environment, our medicines, even our fashions — which is why we need to continue to study and monitor the health of these important organisms.