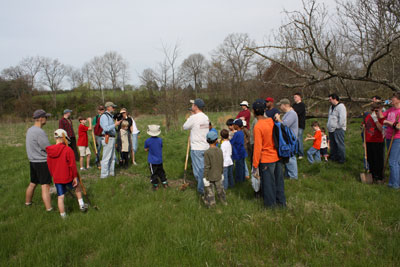 Thirty-five people, including three adults and 10 girls from Girl Scout Troop 3570, planted 243 of the 327 trees and shrubs, came out on April 22nd, 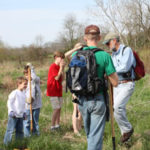 leaving us in a quandary for the follow-up project on Saturday, April 25.

With about 75 people expected, including 23 boys and 17 adults from Cub Scout Pack 965 of Leesburg and a contingent from Boy Scout Troop 950, we were worried we wouldn’t have enough work for all of them.

Cub Scout Pack 965 knocked out their 84 trees and shrubs in no time, while the rest of us concentrated on removing invasive alien plants.

Boy Scout Troop 950, working with Phil Daley and Elizabeth Evan and two of her children, removed invasives along the tributary on the far western side of the farm where we planted all the trees and shrubs on Earth Day.  Others of us worked on invasives near the old stone dam.

A recent visit to the site revealed that most of the 1,000 trees and shrubs that were planted on Earth Day and last year are thriving. 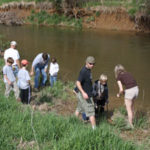 To ensure their continuing health, we are planning on visiting the farm every week and, if necessary, watering the plants and removing invasives around the new trees and shrubs.

Around the first of August we are going to organize a project to protect the trees and shrubs from deer, one of the greatest threats to young plants.