Sumac refers to deciduous plants typically belonging to the genus Rhus and related genera within the family Anacardiaceae. This includes toxic species such as Poison Ivy and Poison Oak, and  more benign, beneficial plants such as Staghorn and Smooth Sumac. The flowers of these plants are beneficial to humans in addition to serving as a food source for native wildlife. 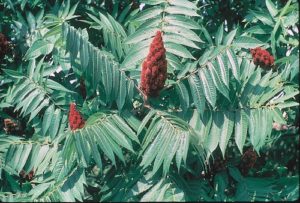 The Staghorn Sumac (Rhus typhina) is one of the most recognizable of these species and is known for its large drupes that form on the terminal end of its branches. Its name is derived from its resemblance to the velvety stage of young deer antlers. It grows to 3-10 m, producing alternate compound leaves with 9-31 serrate leaflets and brownish hairs covering the stem and leaf petioles. Both males and females produce dense conical clusters of greenish flowers that turn bright red in late summer and can last throughout the winter. This provides an important food source for several species of birds and other animals.

Staghorn Sumac is spread both by animals who eat the seeds, and clonally through the use of rhizomes that radiate out from a central plant. It is native to the northeastern US and Canada and is widespread in the Appalachian Mountains. Staghorn Sumac has been used for centuries by Native Americans who would mix the berries with tobacco and smoke it because of its strong flavor. It is also commonly used as a natural dye, and the berries can be crushed and used to make a drink similar to lemonade.

There are around 100 species of birds that utilize the Staghorn Sumac as both a food source and for shelter. Among these are woodpecker, robin, sparrow, towhee, tanager, bluebird, and wild turkey. It is easy to cultivate Staghorn Sumac, as it grows in poor/acidic soil, is cold-resistant, and grows rapidly. It is best to plant it in a moist but well-drained location that receives plenty of sunlight.