Have you ever found a large insect that looked like a cross between a spider and a cricket? Well, if it happened to be in a warm, moist place like your basement, then it was probably the Camel Cricket. Camel Crickets are sometimes known as Cave Crickets and are very unique. 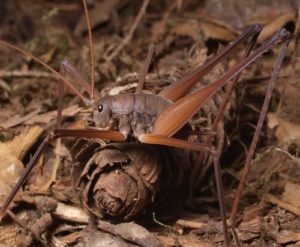 They get their name from their hump-like back. Their heads arch downward between their front legs, and their antennae are longer than their bodies. Like other crickets, they are good jumpers and are varying shades of brown. However, unlike other crickets, they are unable to chirp and have no wings. They survive as nymphs in the winter and look the same through their whole life cycle, with the exception of their size.

Camel Crickets are more active at night and prefer areas that have high humidity and moisture. Outdoors, these crickets can be found in wood or stone piles, tall grass, tree hollows, ground holes, and caves. During dry spells, they seek moisture and may turn up in laundry rooms or garages.

They are sometimes viewed as pests because of their tendency to eat fabrics and sometimes houseplants when desperate for food. Otherwise, they are mostly considered nothing more than a nuisance. Seeing one is nothing to be alarmed about, so instead of smashing it or resorting to some kind of extermination, just pick it up and let it go outside.

Obviously, Camel Crickets should not be considered a threat or a pest. They are really neat to look at, so if you ever get the chance, take the time to look at it before letting it go. Insects get a bad rap, but I see no reason to not co-exist with such a benign neighbor.