Box Turtles at the Rust Sanctuary: Not Quite an Island 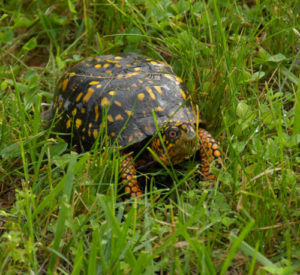 Over my years at Rust Nature Sanctuary, although only in my very limited spare time, I have been compiling a record of box turtles on the property. The procedure is pretty simple: If I find a box turtle and I remembered to bring my camera that day, I take its picture.

Actually, it’s a little more systematic than that. I photograph the carapace (upper shell) and plastron (lower shell); shell patterns allow me to identify individuals. If it’s one of the bolder individuals and doesn’t immediately withdraw into its shell, I try to get a portrait as well.

I also record the gender and the time, date, and location found. Because I do this on a fairly haphazard basis, it’s not surprising that I’ve identified only ten individuals since 2003. This, I believe, represents only a fraction of the likely total population. We have a lot of good box turtle habitat here.

From the ground, Rust seems well connected to other natural areas. But when I look at us on Google Earth, I see just how thin, and perhaps fragile, that connection is. We’re not quite an island, but one of two changes in neighboring land use could cut us off as far as some species are concerned.

Conservation biologists recognize that this sort of habitat fragmentation, the dicing of natural habitat into smaller and smaller bits separated by human-dominated landscapes, is the greatest threat to biodiversity today. Unfortunately, Loudoun County is no exception to an accelerating global trend towards greater habitat fragmentation.

In little more than half my lifetime, I’ve seen northeastern Loudoun go from largely rural to largely urban and the southeast seems to be catching up fast. Western Loudoun is still predominately rural and contains much natural habitat, but for how long?

Habitat fragmentation is particularly hard on long-lived, slow reproducing, low mobility species with specific habitat needs, which describes box turtles pretty well. They can live fifty years or more, produce relatively few young, and have small home ranges from which they usually do not venture very far. Although they use a variety of natural habitats, moist forest seems to be particularly important to them.

If Rust were completely cut off from other box turtle populations, not an entirely remote possibility, our local population would be at risk for slow extinction through inbreeding. That’s one of the many risks habitat fragmentation poses to vulnerable populations. Loudoun County, however, still has time to consider how its development patterns affect local biodiversity and, more important, to take action to reduce and even reverse some of those effects.

Preservation of open space, particularly large areas of natural habitat, is an essential component of preserving biodiversity. But this is not sufficient by itself. Habitats need to be connected by corridors to allow for genetic exchange between populations.

These and other elements of the Loudoun’s green infrastructure need as much attention as the infrastructure of roads, wires, and residences. The alternative:  increasing fragmentation of natural areas into islands that will no longer sustain Loudoun’s biological endowment.