You might think that studies to map the mating activity of frogs and salamanders, track how many bluebirds have fledged in a given year, or count the number of aquatic insects that inhabit a stream impacted by habitat improvement activities are meant to be conducted by professional researchers from laboratory facilities or distant institutions of higher learning.

But the truth is that these activities are alive and well within our own Loudoun County, and that they are being conducted by interested citizens who volunteer their time to learn analytic approaches to monitoring our natural environment in a fun, yet scientifically robust manner.  These volunteers are part of a larger phenomenon that is happening all across the country as concerned citizens are engaging in environmental studies, and effectively democratizing the nature of scientific monitoring.

Eleanor Ely, editor and writer of the EPA-supported Volunteer Monitor National Newsletter, defines citizen science as “projects in which volunteers partner with scientists to answer real-world questions.”  Below are three examples of how the Loudoun Wildlife Conservancy is contributing to our country’s citizen science movement and is changing the way communities view science and environmental management. 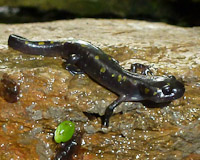 Our amphibian monitoring program began as a pilot project in 2006.  Nicole Hamilton kicked off this program with support from Liam McGranaghan, a Loudoun County environmental science teacher, Cliff Fairweather, a naturalist at the Audubon Naturalist Society, and Mike Hayslett, a herpetologist and teacher at Sweet Briar College.  There are three ways to participate – through site surveys, frog-call driving surveys, and migration mapping.

Since starting the program, we have gathered data from over 50 participants.  Conducting our surveys has been educational as well as fun for the participants, who have learned about the different habitat needs of amphibians, the life cycles of these animals, and the abundance (or lack) of specific species.

We’ve had a lot of fun examining vernal pools in 40-degree weather and watching salamanders walk over forest floors and snow to reach their breeding sites.  We’ve watched the effects of the drought on frog and salamander tadpoles.  We’ve discovered new locations where amphibian populations are thriving, and we’ve started developing relationships with citizens of the County in order to share our data and protect important habitats.  We’ve had students discover new vernal pools in their neighborhoods and study them as part of their science studies.

Studying amphibians and their habitats takes us out during unexpected times doing unexpected things.  On warm, rainy spring nights, it’s the intrepid few who think, “Hey, I’d better go outside,” but that is just what we do, because this is when the amphibians are active – moving to and from their breeding ponds and forests.  An area we are going to work harder at next year is mobilizing volunteers to help with migration mapping, also known as “big night” events.

These are the nights when the frogs, toads, and salamanders move from forests to breeding pools; and these are the times when we can help them cross the road. Road mortality is extremely high for amphibians on “big nights” – an entire population can be killed in a single night as they try to cross a busy road.  If we can locate the migration routes, we may be able to not only capture data but also help promote the well-being of local populations. On March 21, we will hold our Loudoun Amphibian Monitoring Program kickoff and launch a series of programs centered on learning about amphibians and their habitats. 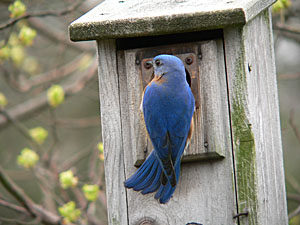 Beginning with 13 trails in 2004, the program has grown to include 22 trails and approximately 70 volunteers.  This year, it has expanded to include private, home trails in response to requests by monitors and others who wanted to collect data on nestbox activity around their homes.   Our dedicated volunteers meander happily through meadow and field, ever watchful for a feathered family fledging its young.  The commitment of these volunteers has helped to support bluebird proliferation in Loudoun.

This season we had an overall success rate of 75% of 241 nest attempts as 635 bluebirds fledged from our trails.  Bluebirds and monitors prevailed over the challenges inherent in changing habitats, inclement weather, predators, and invasive bird species.  Monitors rotate checking each nestbox once weekly and determine what type of bird has nested there, count and check eggs or young, and record the information in a notebook.

Once the young have fledged, the monitor removes the old nest and brushes out debris so the birds can begin anew.  Bluebirds will raise several broods each season if conditions are right.   Monitors are ever watchful for threats to the birds’ livelihood, such as invasive European Sparrows, which can be quite aggressive.  There are techniques for dealing with these invaders, and monitors are trained in helpful strategies.  Monitors also report needed repairs and generally serve as guardians of the trails.

At this writing, the data has been collated and sent to the Virginia Bluebird Society where it will help trace the long-range patterns among the bluebird population within our state.  Without the valuable volunteer efforts of our monitors the data would be lost.

Anyone interested in joining this rewarding field work is invited to our 2009 kickoff program at Banshee Reeks Nature Preserve on February 28 from 1:00-3:00.  There you’ll meet our current monitors and enjoy a program on bluebirds.  Additionally, keep your eyes on our website for an announcement about a predator guard workshop this winter.  We are always in need of nestboxes and predator guards!

Stream Monitoring
Members of Loudoun Wildlife Conservancy have been monitoring streams throughout Loudoun County since 1996.  We monitor streams that are threatened by development or land use practices, as well as pristine streams in preservation areas and degraded streams in urban or farming areas. 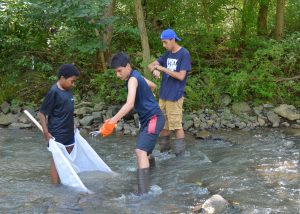 Stream monitoring involves bacterial sampling and the collection of the diverse array of critters that live beneath, amongst, and on top of the rocks and cobbles that carpet the streambed to determine the overall quality of the water and health of the stream system.  By examining the array of aquatic beetles, fly larvae, hellgrammites, worms and even crayfish, one can tell a lot about the ability of a stream to support life and remain healthy.

Loudoun County’s streams, like streams throughout most of our nation, are seriously threatened by a variety of forms of pollution. Fertilizers and pesticides that run off farmland, oil and gasoline from roadways and construction areas, organic wastes from livestock or sewerage facilities, and sediment from eroding hillsides all have a negative impact on the natural stream environment.  Also, bacterial pollution enters streams from all of these sources.

Some types of aquatic organisms are relatively tolerant of pollution, such as flatworms and blackfly larvae.  Other groups of aquatic insects, such as stoneflies, mayflies, and many types of caddisflies, are less tolerant.  When we find a preponderance of tolerant forms of life, it is a good indication that the stream’s water quality is being compromised by some form of pollution.  On the other hand, when we observe a higher percentage of intolerant organisms, we know that water quality is relatively good.  Loudoun County hosts streams representing a diverse array of stream quality and conditions.

Loudoun Wildlife Conservancy offers training and a certification program to volunteers interested in monitoring stream health.   This year’s season will kick off on Saturday, April 4, at Temple Hall Regional Farm Park north of Leesburg.  Volunteers who successfully attain certification receive a stream monitoring kit with the necessary equipment and guidance to sample stream-dwelling organisms every three months and identify them as pollution tolerant or intolerant.  The data and numbers of organisms in each group are tabulated to attain a water-quality index or score.

Data sets from different sites are entered into a database and trends over time are tracked, with volunteers meeting regularly to discuss the data and exchange sampling tips and notes.  Some of the results are exciting to share and encourage other volunteer efforts that impact streams, such as habitat restoration activities.

For example, Loudoun Wildlife Conservancy volunteers documented notable improvements in Limestone Branch at Temple Hall Farm some 2–3 years following a riparian, or streamside vegetation, tree-planting activity to protect and stabilize the streambank and floodplain.  And volunteers who recently adopted a stream monitoring site on Catoctin Creek at the historic Phillips Farm in Waterford, in conjunction with a series of tree and shrub planting and habitat restoration activity led by Loudoun Wildlife Conservancy and the Waterford Foundation, are hopeful that they will see similar improvements over time.

People like to see firsthand that their hard work is achieving meaningful results, and it is citizen science activities such as these that make environmental stewardship truly rewarding.  New volunteers and observers are always welcome.