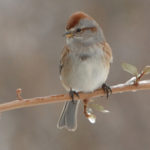 On December 28, 2007, for the eleventh year in a row, a combination of 80 experienced and new birders spent hours counting every wild bird they could find in the 15- mile-diameter circle that comprises the Central Loudoun Christmas Bird Count (CBC). The circle stretches from Ashburn Road in the east to Franklin Park in the west and from Waterford in the north to Aldie in the south. While most of the birders were members of the Loudoun Wildlife Conservancy, several of the counters came from Fairfax and Arlington, and one from as far away as Indian Head, Maryland. They were part of the largest (over 50,000 observers on more than 2,000 counts in the western hemisphere) and oldest continuous (108 years) citizen-science project in the world. The information gathered through these counts has become invaluable in measuring early winter bird populations and monitoring long-term trends, some good and some bad. 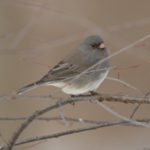 In what was, for the most part, an average year, our 80 counters found 90 species and 28,979 individuals. However, because this has proven to be an irruption year, a time when species that inhabit and spend most of their lives in the tundra or boreal forest in North America irrupt out of their normal wintering grounds, we found a number of boreal forest species. (For more information on irruptions, see the last issue of the Habitat Herald at www.loudounwildlife.org.) These included the only new species we found this year — two Black-capped Chickadees (our local chickadee is the Carolina) — and unusually high numbers of Purple Finches (85), Red-breasted Nuthatches (12), and Pine Siskins (6). The one Rough-legged Hawk, only the third found in our 11 years of counting, was another indicator of an irruption year. 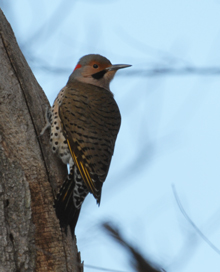 However, it was a great year for birds of prey. For the first time we observed more Red-shouldered Hawks (113) than Red-tailed Hawks (109). And that count of 113 was 33 higher than our previous high for that species. We also found six more Bald Eagles (18) than our next-highest year, as well as 13 Northern Harriers, 20 accipiters, and 28 American Kestrels. And while we did not set any records for owls, we found one Barn Owl, seven Eastern Screech Owls, five Great-horned Owls, and 20 Barred Owls (our second-highest count ever for this species).

It was also a good year for gulls, with over 1,100 Ring-billed Gulls, 77 Herring Gulls, and 2 Great Black-backed Gulls, most at the landfill. While all three of these species are found in larger numbers in the counties to our east, they are not nearly as common in Loudoun County, perhaps because of how tidy the landfill is kept.

Other unusually high counts of species included 17 Red-headed Woodpeckers (compared to the previous high of 12), 20 Common Ravens (the previous high being 17), 110 Horned Larks, 271 White-breasted Nut­hatches, and an astounding 654 Eastern Bluebirds, a number that is surely the result of the many LWC bluebird boxes scattered around the county. 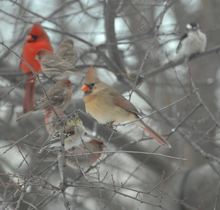 Mixed flock of cardinals, juncos, sparrows and a downy woodpecker

At the end of the day, about 60 very tired (some had been in the field since 3:30 a.m.) but very satisfied birders met at the Audubon Naturalist Society’s Rust Nature Sanctuary in Leesburg for a Tally Rally to share our finds and misses and celebrate another great effort with a hearty dinner.

While all 80 counters made the Central Loudoun CBC possible and deserve a thank you for their efforts, special thanks is owed to the 22 leaders who coordinated the count in their own specific areas, and to those individuals who worked on the Tally Rally. Special thanks also to the many private and public landowners who gave us permission to visit their properties for this special event. Without the unencumbered access given by private landowners and public facilities that normally restrict access to their properties, this count would not be nearly as successful or complete.