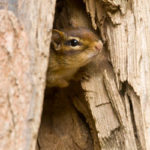 A Native American legend says that the chipmunk gained the black stripe on its back after a fight with a black bear!  This story reflects the reputation of the chipmunk as an adorable yet feisty creature.

Chipmunks use their cheek pouches to carry food to their burrows or carry away dirt while creating the burrows; they can fill their cheeks up just like a hamster hoarding treats.

Even though these creatures are named for their “chip” call and the “chip” choruses they have been known to sing, the life of an Eastern Chipmunk is generally solitary.

Unlike squirrels, they will live most of their days alone, coming together only to mate.  The male chipmunk has nothing to do with the raising of its offspring; the babies will remain with their mother for about a month, after which they are on their own.