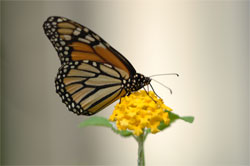 On August 5, the Loudoun Wildlife Conservancy held its Tenth Annual Butterfly Count. The count is modeled after the Christmas Bird Count with a 7.5-mile count circle broken into sectors, with count teams assigned sectors in which to look for and identify butterflies, and data collected. We use the data locally to identify any trends in populations, but we also send the data on to the North America Butterfly Association (NABA) so our data can be compiled and compared with that of other counts across the country.

Our butterfly count was started in 1997 by Bob Lyon, who began collecting data on the different butterfly species. He discovered that Loudoun County has the highest number of species flying in the August period. Therefore, rather than conduct our count on July 4th as other locations across the country do, our count takes place on the first Saturday in August.

This year’s count was another splendid one. The day was sunny with temperatures in the mid-80s, and there was often a light breeze. Thirty-seven people from across Loudoun, and some from Fairfax County and West Virginia, joined us. We broke into four teams, headed by Joe Coleman, Mona Miller, Phil Daley and Nicole Hamilton. At about 9 a.m., as the sun warmed the wings and awoke the butterflies, we began our count and continued until almost dark.

Across our four teams, we saw 47 species for a total of 2,452 individual butterflies. An interesting shift in the numbers this year showed the Eastern Tiger Swallowtail as the most common butterfly we saw. This is unusual because the Cabbage White, while not a native species, is usually the most common. Other species that took center stage this year included:

Monarchs: We had 166 sightings this year. This is the highest number of individual Monarchs counted in our ten years. This is quite encouraging to see because in 2001 a storm hit the forest area in Mexico where the majority of the world’s population of Monarchs over winter, killing 80% of the population. Over the past few years, there has been much concern over whether the Monarch could rebound from this heavy loss. A few days before our count, we received an email from Monarch Watch saying that the number of Monarchs was on the rise, and it was thought that the populations had returned to pre-2001 levels. At least based on our count, we can confirm that the numbers are up, and the butterflies look large and healthy. Now, we just need to do our part to keep them that way through protecting and providing their critical habitat areas. This means maintaining weedy areas where essential plants can thrive, such as milkweed, the host plant for the caterpillars, and asters, goldenrod, and other nectar plants needed for the fall migration back to Mexico.

Fritillaries: Both Meadow and Variegated Fritillaries were out in force this year. They both feed on violets as their host plant, so this indicates that perhaps this was a good year for violets as well.

Pearl Crescents: Last year Loudoun took the record for the country’s highest number of Pearl Crescents seen. This year the numbers were only a fraction of what we saw last year, but this species was still the third most seen butterfly for us.

Many thanks to all of our volunteers for making our tenth consecutive butterfly count a success:

You can see the results of the count here.