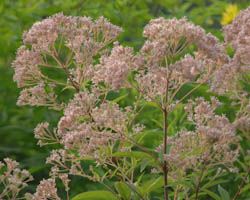 Summer eases into fall by showing off the lavender-blue flowers of the native American herbaceous perennial Joe-Pye Weed .

Several species of Joe-Pye Weed, members of the aster or daisy family, bloom in the mid-Atlantic region during late summer and fall. Joe-Pye Weed thrives across much of the landscape from Maine west to Michigan and then south to central Florida and Texas. The upright growing plant grows on average from three to six feet tall but can reach a height of ten feet.

During the summer, Joe-Pye Weed bears showy panicles of dusty rose to lavender flowers and has dark green whorls of lance-shaped leaves. Each individual flower is small (½ inch), but the panicles can be up to 18 inches in diameter. The panicles attract butterflies including Zebra Swallowtail, Variegated Fritillary, Tiger Swallowtail, Black Swallowtail, and skippers, as well as hummingbirds, bees and wasps. Joe-Pye Weed grows best in moist to slightly moist, well-drained soil under full sun to partial shade. This plant can also be grown in containers.

According to folklore, the name Joe-Pye Weed comes from an American Indian named Joe Pye. Joe Pye used this plant to cure fevers as well as to treat an outbreak of typhus during the colonial era. The entire plant can be used as an alternative medicine, with the roots being the strongest part. When the leaves of Joe-Pye Weed are crushed they emit an apple scent.

If dried and burned, the leaves have been known to repel flies. The dried root and flowers can be infused to create a diuretic tea to relieve kidney and urinary problems. The tea is also used to induce sweating to break a high fever. The flower has been used for treating rheumatism, gravel (gallstones), and dropsy (fluid retention).

Joe-Pye Weed (Eupatorium fistulosum) is also referred to as Trumpetweed. The genus Eupatorium is named for the Greek Mithridates VI Eupator, King of Pontus, who was an enemy of Rome in Asia Minor and lived from 132-63 B.C. The species name fistulosum is from the Latin for “pipe,” because a Trumpetweed stem is hollow like a pipe.

Several varieties of Joe-Pye Weed can be found to our east along Maryland’s streams, rivers, and roadsides. The Maryland Native Plant Society has identified three types of Joe-Pye Weed: Hollow Joe-Pye Weed (E. fistulosum), which has a purplish, glaucous plant stalk that is hollow or tubed in cross section; Sweet Joe-Pye Weed (E. purpureum), which usually has a solid or mostly solid plant stalk that is slightly glaucous but usually purple only at the leaf nodes. Its leaves or stalks may exude a vanilla scent when crushed (however, don’t crush the stalks); Three-nerved Joe-Pye Weed (E. dubium) has a purple-speckled stalk and deep purple flower clusters which are smaller and less domed than the previous two species. This type can be found in Virginia’s Piedmont.

A fourth species, which is common farther north and grows in higher elevations to the west and southwest, is spotted Joe-Pye Weed (E. maculatum). It has a more flat-topped (less domed) flower cluster and a purple or purple-spotted stalk that is rarely glaucous.