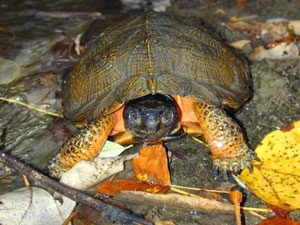 The wood turtle got its name because each segment of its shell looks like the cross-section of a tree branch complete with radiating growth rings. Interestingly, just as you can count the rings on a tree to determine its age, you can also count the rings on a segment of the wood turtle’s shell to get an idea of its age. The difference with the wood turtle rings, however, is that for the first 15-20 years of its life, the wood turtle adds one growth ring per year. Then as it gets older, the rings become worn down and are harder to distinguish. Additionally, the turtle grows more slowly after age 20, and the rings are usually so small that it is harder to count them. The oldest known wood turtle was approximately 58 years old.

Unlike other turtles that favor either land or water, wood turtles reside in both aquatic and terrestrial habitats. They require streams and rivers for mating, feeding and hibernation, but also require terrestrial habitats for egg-laying and foraging. Their preferred habitat is lowland forests with trees such as oaks, black birch and red maple and open wet meadows that are located near moderate to fast current streams or rivers with sand or gravel substrates. Wood turtles are also found in agricultural fields and pastures. Open thickets of alder, multi-flora rose and greenbrier are favored basking areas and are safe havens used by hatchlings.

Wood turtles are rarely far from moving water, generally staying within 300 yards. Studies have shown that these turtles select their territories rather than use them randomly. They show fidelity to their home ranges, which often overlap with other individuals’. Wood turtles have proven to be quite smart with the intelligence similar to that of rats in solving mazes. They have also shown to be able to find their way home from as far as a mile away. It is thought that they find their way by using their olfactory senses. They are also good climbers, able to climb chain-linked fences and have good depth perception and vision.

From April through November, wood turtles are active during the day, foraging in the woods, wet meadows or along stream banks for food such as insects, small fish, snails, tadpoles, leaves, earthworms, dandelions, berries, sorrel, strawberries, grasses, sedges and mushrooms.

One interesting behavior is stomping its feet on the ground in order to presumably mimic the vibrations of rain. Earthworms then come to the surface, and the turtle snaps them up.

Wood turtles become sexually mature between the ages of 10-14. Once mature, they mate in spring or fall. During months of May through June, the females travel sometimes many miles to reach communal stream banks, most often where they themselves were born, to lay their eggs in sand and gravel. This communal nesting occurs more frequently as suitable stream banks become scarcer. When laying their eggs, they generally prefer a south-facing sand bank or openings in flat sandy soil next to streams. During the winter, wood turtles hibernate on bottoms of streams or inhabit stream banks, hibernating in large community burrows.

Wood turtles are currently on the threatened species list, but at one time they were abundant. There have been many causes for their decline, yet none of these are things we cannot correct.

Habitat Loss and Pollution: Water pollution, irrigation and forest erosion have spoiled many of their habitats. Wood turtles require clear water. As streams endure more erosion and sedimentation, water becomes unusable for the turtles. Damming of streams continues to destroy their habitat, and the use of pesticides degrades habitat, further threatening the future of wood turtles.

Collection for biological uses: Wood-turtle decline began in the 1970s when collection of adults became popular for use in biology classes. One account by a collector shows that in just one stream bank where he took over 100 wood turtles, today there are none. Because they are so scarce today, this collection practice has declined.

Collection for Pets: Collecting wood turtles for pets is another problem that has taken a high toll on populations. As pets, wood turtles are not given the proper amount of space or the substrate needed for breeding. Each adult removed from the wild means a loss in future generations. Because of the long time it takes for individuals to become sexually mature, and the other hazards that they must endure while reaching maturity, removal of even one or two adults from the wild takes a significant toll on their populations.

Road Hazards: Roads cause fragmentation of habitat. This results in turtles having to cross roads in order to get from the foraging forests and fields to the streams. As turtles cross the road, they are often smashed by cars. Here is one tip if you do see a turtle crossing the road and are able to help it: try to figure out which side of the road it is trying to get to and take it there, a safe distance away from the road. Be sure to take the turtle in the direction it was heading, otherwise it will still be intent on crossing the road.

What can we do? As a community, we can pay particular attention to supporting wood-turtle habitat needs. By maintaining water quality, controlling sedimentation, restricting the use of pesticides and establishing buffer zones along streams, we can help wood turtles return from their threatened status to have healthy, stable populations.