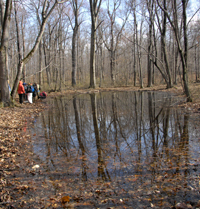 What are wetlands, why are they important, and how do we protect them in an ever-changing world? These are questions of particular relevance in Loudoun County today. This is a very complex issue, from both a scientific and legal/land use perspective, and I will provide several excellent references at the end of this article for those who wish to learn more.

Wetlands are in the simplest sense transitional areas between water and land. As with nearly everything in the natural world, there are not always clear boundaries between clearly different entities, rather there are broad transitional zones known as ecotones. The term wetlands also includes a wide variety of often very different types of habitats known generally as wetlands.

To begin with, we should define the term. The most universally utilized definition is that used by the U.S. Environmental Protection Agency (EPA) and the U.S. Army Corps of Engineers (ACE) at the federal level, that defines wetlands as: “Those areas that are inundated or saturated by surface or ground water at a frequency and duration sufficient to support, and that under normal circumstances do support, a prevalence of vegetation typically adapted for life in saturated soil conditions. Wetlands generally include swamps, marshes, bogs, and similar areas.”

Wetlands are regulated at the federal level by the Corps, with oversight of the program provided by EPA. The primary regulatory authority for federal wetland protection is provided for in Section 404 of the Clean Water Act (CWA). Other federal agencies have ancillary roles in administering federal wetland programs. Virginia also has a separate state wetlands program in the Department of Environmental Quality (DEQ) that also administers portions of the federal program under delegation from the Corps. More detailed information can be found on the respective agency websites listed at the end of this article.

While there is a regulatory definition of wetlands, actually making the determination of what is and is not wetland in the field can be very difficult at times, and this has been the subject of much controversy. The currently accepted methodology is the 1987 Corps of Engineers Manual for Identifying and Delineating Jurisdictional Wetlands, in conjunction with periodically published federal guidance. This manual requires the positive existence of three parameters to consider an area wetland – wetland hydrology, hydric soils, and hydrophytic vegetation, except in certain atypical and disturbed circumstances. This manual can be accessed through the Corps’ website.

Why are wetlands important and worth protecting? Wetlands are widely recognized as some of the most productive habitats that serve many unique functions in our landscape. Wetlands are vitally important to protecting water quality in our streams and other surface waters due to their ability to filter tremendous levels of sediment and attached pollutants from storm water and out-of-bank floods. They also provide significant floodwater storage capacity. They are often referred to as nature’s sponges and filters, and this is certainly a suitable comparison. The loss of wetlands inevitably leads to reduced water quality, increased flooding, and impaired biological communities. 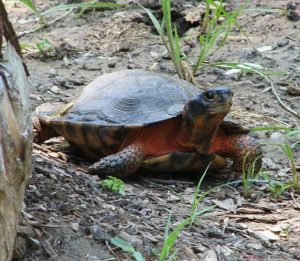 Wetlands are also unique in that they provide critical habitat to a large number of wetland-specific plant and animal species, many of which are imperiled, and also provide habitat variety to non-wetland dependent species. The state-threatened wood turtle (Glyptemys insculpta, formerly Clemmys insculpta) is a prime example of a species that utilizes wetlands and streams for important phases in its life cycle. The loss of wetlands contributes significantly to the loss of natural biodiversity.

The protection of these important wetland functions provided the basis for the implementation of the federal and state wetland programs. The federal wetlands program is limited to the discharge of fill into waters of the U.S., including wetlands. The reach of federal jurisdiction was expanded over time from the inception of the CWA to include wetlands of all types, but it has recently been limited by federal court cases. The Virginia state program regulates other types of wetland disturbance, such as draining and disturbance of vegetation, and is not as limited in jurisdiction as the Corps is by recent federal court decisions.

A permit process exists at the federal and state levels to allow for wetland disturbance in accordance with various laws and regulations; the governmental agency websites should be consulted for additional information. Any proposed wetland disturbance is mandated to follow a three-step process known as mitigation that seeks to limit impacts to those that are clearly unavoidable. The three steps are avoidance, minimization, and finally, compensatory mitigation, where wetlands are restored or created to replace lost wetlands.

Unfortunately the wetland protection programs operate in an increasingly politicized atmosphere where property rights advocates believe such programs to be confiscatory and somehow “un-American”. In the absence of changes in the laws and regulations themselves, I have seen too many instances where unscrupulous developers and consultants, in concert with inadequately trained or apathetic government regulators, circumvent these reasonable restrictions that protect our environment and the general welfare of all citizens. These pressures are clearly at play in Loudoun County.

One of the greatest shell games in history is being foisted upon the public in the guise of “wetland mitigation”. Although many wetland consultants and regulators will insist that created wetlands are adequate compensation for lost natural wetland systems, the vast bulk of the wetland science on the subject proves otherwise. Too often these projects are functionally isolated from their watersheds and become dominated by invasive species, with minimal monitoring and maintenance. Man-made wetlands are seldom if ever a preferred alternative to what nature has provided and developed over long periods of time.

Unfortunately, wetland mitigation has become a big business, and one that encourages the further loss of natural wetlands. It is ironic that many of the wetland consultants advising developers also engage in extremely profitable mitigation work, setting up an interesting dynamic whereby increased wetland impacts on a project result in increased profits. The mitigation craze also seems to be preferable to many regulators in that it reduces conflict with developers over enforcing adequate avoidance and minimization and helps to keep the paper stream moving along. Unfortunately, the expansion of this approach, commonly referred to as the mitigation buy-down approach, results in an ever-increasing workload and encourages more impact applications. This further reduces the level of project review by chronically under-staffed regulatory agencies.

How can the average citizen assist in this effort? Get informed and get involved in the process. Jurisdictional determinations and permit applications for wetland impacts are available on the Corps’ website. Conservation groups such as Loudoun Wildlife Conservancy and the Piedmont Environmental Council (PEC) often monitor upcoming development proposals and provide citizen alerts. Best of all, become further educated in the technical aspects of the process and get involved through writing letters and attending public hearings. The best defense for our diminishing wetland resources is a well-educated and determined public that insists on the vigorous enforcement of our wetland protection laws and regulations.