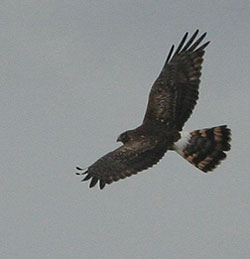 Nothing is more intrinsic to the survival of a bird than feathers. Wings are necessary for flying, but other flighted creatures, such as insects and bats, go without feathers. Mammals possess hair, a compression of dead cells and pigment, and feathers are basically the same material. However, the shape and structure of a feather fulfills the vital needs of birds, aiding in aerodynamics, conservation of body heat, and even the attraction of a suitable mate.

Stiff flight feathers on the wings and tail make flying possible. The stiffness of tail feathers help in balancing while perching and steering while flying. Waterproof contour feathers cover a bird’s body, protecting the skin. Down feathers lie beneath the contour feathers, keeping the bird’s body warm. A bird can fluff its down feathers for added insulation on cold nights.

Some birds spend hours each day preening. The word preen carries with it a connotation of vanity, but well-groomed feathers can mean the difference between life and death for a bird. Clean feathers with “zipped” barbs help birds fly quickly and escape danger. A bird with mussed feathers will have a hard time flying and will find itself vulnerable to predators.

Most birds also have oil glands on their bodies. They gather oil on their beaks and “comb” it through their feathers to waterproof them. Water will never reach the down feathers of a well-preened bird. Even in extremely cold weather a bird will happily bathe in a heated birdbath to clean its primary and contour feathers. The down feathers will keep the bird’s body warm and dry even though its outer feathers are wet.

A number of bird species have specially adapted feathers to fulfill the unique needs of that species. Owls, which rely on their sense of hearing to capture prey at night, have primary feathers with a fuzzy edge that works as a “silencer.” Broad-tailed Hummingbirds have feathers with a different function ― their wings produce an extremely high-pitched noise when they fly. This sound functions as a territorial warning. Water birds, including ducks and gulls, have especially dense plumage compared to birds that don’t spend time in water, and arctic birds have a greater number of feathers in winter compared with birds that spend their winters in warmer climates.

Ptarmigans even grow special fluffy feathers over their feet to keep them warm on the arctic tundra. Egrets, Mourning Doves, and some parrots have special “powder down” feathers that aid in preening. These special feathers break down into powder which the bird then distributes through its plumage to improve waterproofing and general feather condition. (When a Mourning Dove crashes into your glass door or window, it is this powder down that leaves a ghostly outline behind.) 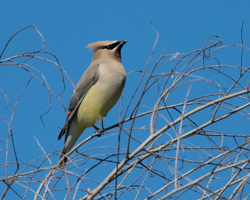 Some feather adaptations do not fulfill any apparent need but simply reflect the lifestyle of the bird. For example, Cedar and Bohemian Waxwings have waxy deposits on the tips of their smooth feathers. The color of these drops varies depending on the color of berries or other fruit the birds happen to eat. The redness of House Finch feathers also varies with diet. Plumage variations based on geographic location, but unrelated to diet, are also seen.

Colorful plumage plays its greatest role during the mating season. A number of studies have linked bright color to mating success. The male cardinal with the most blazing plumage will probably have first pick of the females. Male Goldfinches acquire their characteristic bright-yellow feathers during this time; the females remain a dull greenish-yellow. Egrets and herons grow stunning plumes for the breeding season, and Mourning Doves develop iridescent patches on their throats when it is time to mate. Wild Turkeys and their relatives, peacocks, puff up their feathers and strut to show off their plumages.

Special feathers are important for reasons beyond mating, too. Hummingbirds use their iridescent throat feathers—called a gorget—in territorial displays. Juncos flash the white beneath their tails when they are agitated, similar to the way a startled deer in the woods flashes its tail as it bounds away from us. Mockingbirds, gnatcatchers, and red-starts also flash colored or white markings on their wings or tails when they feel threatened or challenged.

Birds that rely on brightly colored feathers for mating usually molt twice a year—in the spring before breeding (producing “breeding” or “alternate” plumage) and again in the late summer to early fall (resulting in “basic” plumage.) All birds molt at least once a year, usually in late summer when there are not as many major demands on their energy ― the breeding season is over yet it is not quite time to migrate. Food is typically plentiful during this time of year, and that is vital because molting can be exhausting for birds.

In the case of some male ducks, which lose all of their flight feathers at once, it can be incredibly dangerous as well. Most birds lose their feathers section by section on their body, though some individuals lose a large clump of feather at once. Blue Jays and cardinals are especially prone to losing all of their head-feathers at the same time, allowing birdwatchers a rare, though slightly creepy, look at the birds’ ears and skin.

New feathers are called “pin feathers” because when they break through the skin they are encased in a sheath that looks like a pin. The bird removes the sheath by preening. Mated birds often help each other to preen hard-to-reach places, like the back of the neck, through mutual preening (called allopreening.)

Molting allows birds to replenish their feathers before the winter migration. Fresh feathers allow migrating birds to fly efficiently. While camping in Alaska last summer, I was delighted to find myself surrounded by Dark-eyed Juncos on a daily basis. It was a genuine treat to see and hear these “winter” birds in the middle of July.

One of the first things I noticed about these birds was their dirty appearance. The bright white chests and tails I was used to seeing were dull brown. The Alaska juncos still had their worn plumage; they resembled children who had spent a long, summer day playing hard outside in the dust. The juncos that visit my Virginia backyard in their winter plumage look neatly dressed and “ready for church” by comparison.

Some birds seem to make their greatest transformation with the fall molt instead of the spring molt. Ptarmigans and Snow Buntings molt from a summer brown to a bright white plumage, perfect for the snow-covered tundra habitat. European Starlings acquire their star-speckled appearance for winter. These white specks are gone by spring, but not because they are lost in molt. The tips are actually worn down through flying and general “wear and tear” over the winter, giving us a pretty good example of what the average feather goes through over the course of a season.

To us, feathers symbolize beauty and freedom—the promise of flight. For birds, however, feathers are a practical matter. A bird that captures our attention and admiration with its bright, smooth plumage is probably a bird that succeeds at its job: mating, migrating, and surviving.