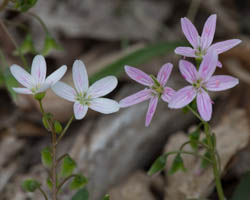 My lifelong journey in botany began with the inspirational moment in a Virginia woods near Harrisonburg when, as a sophomore on a botanical field trip at Eastern Mennonite College (now University), I first discovered spring-beauty (Claytonia virginica) and other endearing spring wildflowers.

But it was the asters, goldenrods, and other fall wildflowers of central New York State, introduced to me as a junior in a plant taxonomy class at Cornell University, that plunged me into the limitless subtleties and complexities of the flora and caught me up in the never-ending intrigue of trying to unravel and understand them.

If you like a puzzle, if you like a challenge, meet the fall flora! To study fall wildflowers it is necessary to study summer wildflowers as well, because the fall flora is largely the thinned and persisting late summer flora, although some species, notably the asters and certain goldenrods and other composites (members of the aster and sunflower family) are primarily fall- blooming (e.g., cultivated mums). If the weather stays mild, many summer wildflowers will continue to bloom well into fall, at least here and there.

The composite family (Asteraceae, formerly Compositae) dominates the fall and much of the summer. Some commitment to learning the seemingly complicated but basically simple structure of the flowering heads is essential to successful identification. Suffice it to say here that what appears to be a single flower and in fact often behaves as a single flower, such as when a chicory head opens and closes, is actually a whole “bouquet” (inflorescence) of tiny flowers. These tiny flowers, called florets, are of two types: ray florets and disk florets. Many composites have both in the same head. Others have one type or the other. Chicory, for example, has only ray florets. 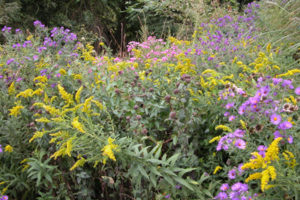 The highlights of the autumn parade are without doubt the asters and goldenrods. To name an aster or goldenrod correctly can be an Olympian challenge, but it is a challenge well worth the try! When you succeed you will belong to the autumn wildflower elite. These flowers grow in a wide range of habitats from dry to wet and open to wooded.

More than two-dozen species of goldenrods (genus Solidago) and over 30 species of aster (genus Aster) grow in the Washington-Baltimore area. (Recent molecular studies have led some botanists to split Aster into several smaller genera.) Starting with the early goldenrod (S. juncea) in mid- to late summer, the goldenrods bloom in force from late summer into fall, to be joined then by the asters.

In addition to the early goldenrod, the gray (S. nemoralis), tall (S. canadensis), wrinkled-leaved (S. rugosa), and grass-leaved (Euthamia graminifolia) goldenrods are among the most common species of open places. In woods, look for the blue-stem (S. caesia) and zigzag (S. flexicaulis) goldenrods. Always interesting to find along roadsides and woodland edges is the silverrod (S. bicolor), a creamy white goldenrod. It has erect spikes in contrast to the more typical inflorescence — golden-yellow arches of one-sided flowering branches flowing from the top of the plant.

Complementing the yellows of the goldenrods, which usher in fall, are the blues, purples, and whites of the asters, which usher out fall. Among the abundant white-flowered asters of fields, waysides, and edges are the calico (A. lateriflorus), panicled (A. lanceolatus), and white heath (A. pilosus) asters. The calico aster is also called the goblet aster because its disk florets have exquisite tiny purplish corollas that are goblet-shaped. In the woods, the white wood aster, with heart-shaped leaves, is common.

The common blue heart-leaved aster (A. cordifolius) ranges widely from open areas and woodlands to backyards and probably is the blue aster most often encountered. There are many other notable blue or purple asters, but none quite so spectacular as the tall, often cultivated New England aster (A. novae-angliae) with its massive bouquets of reddish- purple or rosy heads borne on small flower-stalks that are covered with tiny glands. It likes moisture and grows in ditches, wet meadows, and open bottomlands.

Much shorter but yellow, too, is fall’s bewildering array of blooming Bidens species — beggar-ticks, tickseed-sunflowers, bur-marigolds — in the marshes, flood plains, and even upland habitats. The showiest is the midwestern tickseed-sunflower, Bidens aristosa, which often blankets meadows and roadsides in buttery yellow in fall. Providing vibrant splashes of blue to violet in the exposed moist places is the ageratum-like mistflower (Eupatorium or Conoclinium coelestinum).

Autumn’s seemingly endless palette of color and diversity certainly does not belong entirely to the composite family, but to many plant families. Notable among the fall legumes are the baffling bush-clovers (Lespedeza species) and tick-trefoils (Desmodium species), the latter with distinctive segmented seed pods. The segments, each with a seed, break apart and hitch a ride on fur or clothing. The large and complicated, aromatic mint family contributes many species, including the white-flowered mountain-mints (Pycnanthemum species) of old fields and bottoms and beefsteak-plant (Perilla frutescens), a horticultural import from India with ornamental purplish stems and leaves and white flowers, which has become an autumn invasive of edges and waysides throughout our area. From the touch-me-not family comes the orange or spotted jewelweed, with delicate spurred flowers and turgid pods that explosively shoot out their seeds in all directions if ripe when touched. It blooms continuously over several months, is an abundant annual of wooded as well as open places, and may form dense stands by fall, sometimes head high. The great blue lobelia, with its sentinel spikes of numerous large blue flowers, gives an exotic touch to wet meadows and openings in late summer and early fall.

I have barely touched on the great parade that awaits the fall hiker with a serious enthusiasm for wildflowers. Fall is also a time for many interesting and colorful seed pods and fruits, but that is a subject all its own. Make this your fall to study the wildflowers. Head for the open country — the old fields; unkempt bottomlands, roadsides, and other waysides; woodland openings and edges; and especially open, undisturbed wetlands. Check out the unmowed places such as under power lines or along railroads. Various stretches of the C&O Canal Towpath and the W&OD Trail can be very productive, as at Clark’s Crossing just west of Vienna, where the flora has a touch of prairie. Scout successional fields and bottomland meadows of abandoned farms, as at Loudoun’s own Banshee Reeks Nature Preserve.

See the stream valleys of Loudoun County through the lens of the fall wildflowers before it is too late!