The Endangered Species Act: A Toolkit for Conservation

I’m handy around the house.  I can use my fingernail to drive a screw and the sole of my boot to hammer a nail.  My wife, however, thinks I’m several tools short in my toolkit.

As stewards of the environment, we frequently conjure up creative ways to ensure that our natural resources receive protection, but there is no substitute for an effective toolkit. The Endangered Species Act (ESA) provides many such tools for conservation of which everybody should be aware. The ESA recently turned 30.  It was passed in 1973 by an overwhelming majority, both republicans and democrats, affirming a national sentiment committed to saving endangered wildlife. 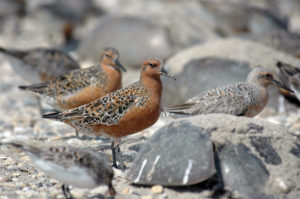 Although the American public strongly agrees that species and ecosystems must be protected, there is a sharp disagreement about how far we should go.  These differences were accentuated in 1978 when the ESA was rightfully put into action to protect the Tellico River Snail Darter, and again in 1990 when the ESA was invoked as a stop-gap measure to save the Northern Spotted Owl.

Opposition to the ESA in both of these instances created a painful gap between environmentally conscious people and well-funded political entities.  Ever since, the ESA has been under attack.  Everyone on both sides must understand that saving endangered wildlife ultimately comes at a price.  Unfortunately, debates about the cost of species conservation typically center around short-term benchmarks such as jobs lost and construction projects delayed.  Consequently, the long-term goal of maintaining a natural resources base that can sustain future generations both economically and aesthetically is lost in the brawl.

The ESA is administered by two government agencies: the U. S. Fish and Wildlife Service (FWS), a branch of the Department of the Interior, and the National Marine Fisheries Service (NMFS), a sub-agency of the Department of Commerce, under NOAA.  In general, the NMFS manages endangered species issues involving creatures inhabiting coastal waters, while the FWS handles the rest.  The ESA’s goal is to protect endangered wildlife and plants and the ecosystems on which they depend.  Without protected habitat, species protection cannot succeed.

The ESA is broken down into 18 sections, each covering a specific area.  The sections that lay out the governing principles of the ESA are Sections 4, 7, and 9.  Section 4 provides guidelines for listing species: a process that can take several years of scientific evaluation to complete; or, in emergency situations, the Secretary of the Interior can speed up the process to as little as a few weeks.  Section 4 also provides the mechanism for establishing critical habitat and implementing recovery plans.  However, since designating critical habitat is a politically sensitive area, only 20% of listed species have it.  A large percentage of tax dollars allocated for endangered species is spent on court costs involving critical habitat disputes.

Section 7 governs how the ESA is coordinated and enforced within federal agencies.  Since the federal government controls over 650 million acres of U.S. land, Section 7 is potentially one of the most effective tools for species conservation.  Even so, it’s not used to its fullest extent.  There is little motivation for federal agencies to comply with the ESA and not enough resources within the FWS to enforce it.  Ultimately, politics plays a primary role in how rigorously Section 7 guidelines are adhered to, and in recent years Section 7 has not been given the opportunity to live up to its potential.

While Section 7 provides species protection on federal lands, Section 9 is geared toward protecting individual species on privately owned land.  Section 7 regulates only federal agencies, but Section 9 forbids anyone from harming an endangered species.  Since almost 80% of all listed species have some or all of their habitat on private land, Section 9 protections are an indispensable tool in our wildlife conservation toolkit.  These protections have teeth, too.  They specifically state that a person cannot kill, harm or harass an endangered animal (note: plants do not receive Section 9 protection), and that includes modifying the habitat on which the species depend for food, shelter, and reproduction.

Other tools that the FWS provides to landowners include Habitat Conservation Plans and Safe Harbor Agreements. These programs allow private landowners to coordinate with the FWS any activities landowners do on endangered-species habitat.  If a species is accidentally taken during the course of approved activities, no consequences will ensue.  Programs such as these are designed to allow landowners to maintain the value of their property and conservationists to protect endangered species residing on non-federal property.

Property rights advocates have been among the most vocal opponents of the ESA. One misconception that private landowners frequently have about the ESA is that when an endangered species is found to exist on their land, their property is transformed into public domain, and subsequently their property values will drop.

However, having a tract of private property designated as critical habitat only means that Section 9 prohibitions against harming and harassing the species will apply.  Property owners are still permitted to do whatever they want with their property, so long as it doesn’t interfere with the survival of the species.  Furthermore, property owners may apply for Incidental Take Permits (ITP) that will relieve them of any liability in the event a species is accidentally killed.

There are many opinions regarding the “problems” of the ESA.  Many people cite lack of FWS funding to administer the ESA.  Some say that it is incomprehensible to everyone but biologists; it is inflexible; it chooses animals over people; and procedures for designating critical habitat are flawed.  Whether or not you subscribe to any of these opinions, if you believe in the precepts of sustainable ecology, you probably believe in the ESA ― most people do.

No matter what you believe, there are problems with the ESA, and there will be changes to it. The opportunity to make the ESA stronger or weaker or to repeal it altogether is now looming on the horizon.  Politics at this level is not a stroll through the park; it can be confusing, frustrating, boring, and even corrupt.  However, the ESA is one of the major frontlines in the conflict over our natural resources, and everyone should be involved.

As a flexible document of American democracy, the ESA is constantly undergoing revision.  Many politicians today would have us revert to screwing with our fingernails and hammering with our boots, but a look around Loudoun County today should convince anyone that we need stronger and better tools in our conservation toolkit.  For further information on the ESA go to http://endangered.fws.gov, and beware of those who say that your toolkit can be improved by taking your tools away.