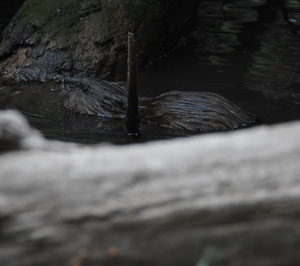 Few animals rearrange their landscapes as much as man; a major exception is the beaver (Castor canadensis).  Their homes are constructed so strongly that not even brown bears can break into them.  Beavers cut down trees not just for food, but also to build dams, canals and spill ways.  They are remarkably adapted to their aquatic lifestyle, having valves in both their ears and nose which automatically close when they are underwater.  Their webbed hind feet allow them to swim rapidly, and their broad, paddle-shaped flat tail serves as a rudder while swimming and to make warning signals to their family.  The beavers’ large incisors and powerful jaw muscles are used to build their structures.

Beavers also have acute hearing and a keen sense of smell, which in combination with the ability to sense vibrations in the earth through their webbed rear feet, allow them to escape from their predators.  Their fur coats are highly effective in shedding moisture and keeping them warm under the coldest and wettest conditions.  Each hind foot includes a split toe which they use as a comb to groom their fur.  They produce a special oil ― castor (hence their Latin name) ― that they comb through their fur for waterproofing.  The castor oil is also deposited in strategically placed “mudpies” so they can mark their territory.

Their front feet have five, relatively long toes, which they use in combination with their front incisors to build their lodges and dams.  When beavers chew underwater their lips close behind their incisors, sealing off the rest of the mouth and preventing water from going down their throat.  While most people associate beavers with lodges and dams, beavers that live in rivers and large streams, such as Bull Run or Goose Creek, live in burrows with an underwater entrance.  As a result, these beavers do not need to build either dams or lodges.  The entrance to these burrows can be found, especially in the fall and winter, by locating twigs and small branches anchored nearby in the mud underwater. 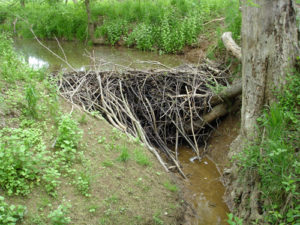 These twigs and branches serve as their winter stores.  Beaver lodges have one or more underwater entrances with their living quarters located in a hollow near the top of the lodge.  Not only will the lodge include a vent to allow air circulation, but the beavers will also spread wood chips on the bottom of the floor to absorb excess moisture.  When they build dams, the structures are usually bowed to lessen the water pressure on them.  Additionally, beavers will build spillways around the dams to let excess water out, and in areas where there is insufficient water flow, they will build canals to channel extra water into their ponds.

Research indicates that beavers pair for life, mating in January or February, depending on how far north they live.  The young are born about four months later, and while they are able to swim fairly quickly, the young beavers are relatively helpless through their first winter.  They stay with their parents for about two years, until the next young are born, and help with chores around their home until that time.  It is when they leave home that we often find beavers in unusual places, even on roads, where they are susceptible to being killed by cars due to their slow gait and poor vision.

When beavers first move into an area, they remove the trees and shrubs around their new home.  The resulting pond serves as a home for a number of different animals, from birds to amphibians and fish.  The resulting openings in the forest let in more light, and plant growth actually increases.  After the beavers exhaust their immediate food supply, they move on to a new area.

Before long their dam on the abandoned pond begins to leak because of the lack of maintenance; then it begins to drain.  Because the soil has been enriched by the presence of the beavers, grassland and shrubby vegetation quickly appears.  Before long, trees are growing in the clearing, and the forest, through succession, reappears.  After enough time the beavers may even return to the area and re-colonize it.

It is possible to find everything from active beaver colonies to abandoned beaver ponds in varying stages of succession during a visit to many steam valleys, such as those that make up the Prince William Forest National Park.  Each stage seems to welcome different types of wildlife.  Earl Hilfiker writes in his book Beavers: Water Wildlife and History:

“A beaver pond goes through a series of stages, each reflecting the changes brought about by the beaver’s manipulation of his environment.  These stages may be likened to those of life, for indeed, the beaver pond can be viewed as a living, changing, and growing thing.  It progresses from birth through infancy, adolescence, maturity, old age and eventually death, or abandonment.

Beavers create one of our most productive and lush habitats ― wet and moist meadows, mostly on floodplains and on their edges.   Beavers were, and still are in areas where they are allowed to thrive, critical to creating habitats that several threatened and endangered species utilize.  There is extensive research showing that natural areas can support and benefit from larger beaver populations.

While many people first react to beavers moving onto their property with pleasure, often this quickly turns to dismay as the beavers begin cutting down prize ornamental trees and shrubs and flooding areas which were once dry.  The first problem is relatively easy to solve as specific trees can be protected by wrapping wire mesh around them from ground level to about three feet high.

In areas which get a lot of snow, it is necessary to wrap the wire higher.  Although it is more difficult to deal with the problem of flooding, it can be solved by building a beaver baffle.  Beaver baffles stop beavers from completely blocking the water flow and prevent a pond from getting too large.  Information and a video on building beaver baffles can be found on our website and through the Humane Society of the United States.

Beaver ponds create wonderful wildlife habitat, which is not only highly productive during the time beavers are active but also for years afterwards.  In addition, beaver ponds do an excellent job of mitigating storm water and reducing soil erosion.  And, last by not least, these ponds are fascinating places for visiting and watching wildlife and the cycle of life.