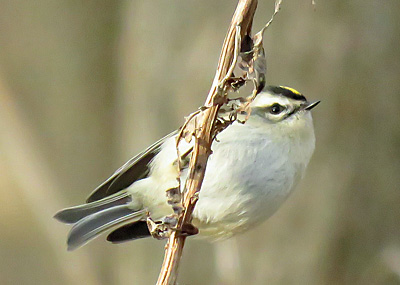 Eighteen hardy birders braved the cold winds of a mid-January day to visit Bles Park for our monthly bird walk.  Our morning started out with Bald Eagles, crows, pigeons and several other common species in the parking lot.  The best sighting in the parking lot was a Cooper’s Hawk that flashed by us in close proximity.  As we ventured through the trails, we didn’t find much bird activity at first, but were relieved by the wind being blocked by shrubs.  As we approached the marsh, we found more birds: Northern Mockingbird and Downy Woodpecker.  In the marsh, we found some Gadwall and many Mallards.  When we approached Broad Run, we were treated to the close flyby of Common Mergansers.  On Broad Run, we found more Mallards and a handful of Hooded Mergansers.  Golden-crowned Kinglets, a Yellow-bellied Sapsucker and Brown Creepers along with more common year round species like Carolina Chickadees, Tufted Titmouse and Hairy Woodpecker were found along the remainders of the trail.  In total we found 34 species of birds — not bad for such a cold, windy day.

A complete list of birds seen during the walk can be viewed on eBird at: https://ebird.org/checklist/S126216888