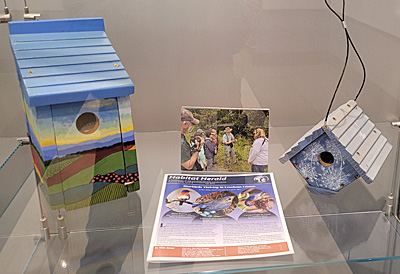 Seven photographers associated with Loudoun Wildlife Conservancy have come together to present an exhibit of 31 photographs of Loudoun County’s wild places and their inhabitants. “Wild About Loudoun!” includes stunning photographs of some of our rarely seen residents of Loudoun including the elusive Eastern Spadefoots, which were recently found at JK Black Oak Wildlife Sanctuary near Lucketts.

“Wild About Loudoun!” runs from December 1 through January 6 in the first-floor gallery of the Loudoun County Government Center, located at 1 Harrison St SE, Leesburg, open from 8:30am – 5pm Monday to Friday, except holidays.

Interesting facts about the subjects of the photos accompany the exhibit in a book with comments by the photographers. Scannable QR codes are included which link to more information about how anyone can become involved in related programs offered by Loudoun Wildlife Conservancy.