Warblers and Raptors are Highlights of Banshee Reeks Walk

On a beautiful crisp fall morning 16 people, led by Joe Coleman and Mike Scott, showed up for the October monthly bird walk  at Banshee Reeks Nature Preserve. The highlights of the walk on the western edge of the preserve were a well-seen Tennessee Warbler, Black-throated Blue Warblers, a Black-throated Green Warbler, both kinglet species and a Brown Creeper. The group also enjoyed watching several Bald Eagles (both juveniles and adults), Common Ravens, and a Broad-winged Hawk, all soaring high in the sky. Other highlights for some of the group included a Gray-cheeked Thrush and a pair of Yellow-bellied Flycatchers. It was also fun to watch the many Blue Jays carrying acorns as they flew back and forth. 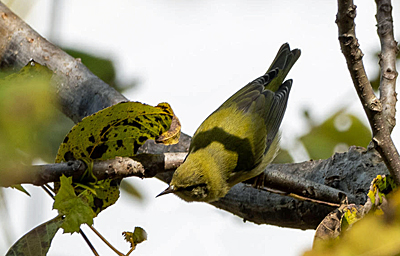 You can also join us for the Central Loudoun Christmas Bird Count on Tuesday, December 28.