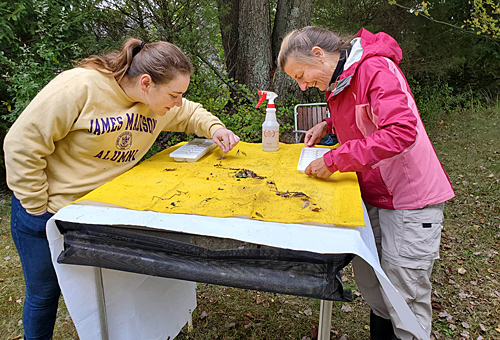 The upstream site received a score of 7 out of 12, indicating unacceptable ecological conditions. This was a decline from the acceptable ecological conditions score of 10 in the spring. A possible explanation for this decline in the stream’s health is that for about a week in August the stream ran dry, which could have resulted in the demise of some of the more sensitive macro populations living there.

Over 70 percent of the 391 macros collected at the upstream site were pollution-sensitive beetles, including water pennies and both larval and adult riffle beetles. About 12 percent of the sample consisted of pollution-tolerant worms. Smaller numbers of mayflies, caddisflies, midges, scuds and lunged snails were also present in the sample. 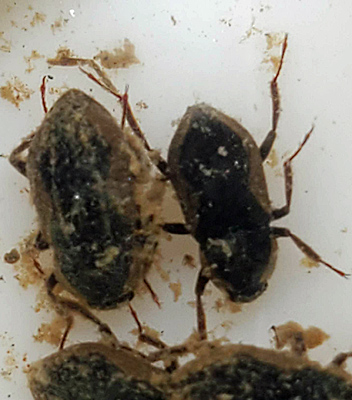 Two of the many riffle beetles found upstream.
Photo by Amy Ulland

After sampling the maximum of four collection nets allowed by Virginia Save Our Streams protocol, only 138 macros were collected at the downstream site – less than the 200 minimum required by the protocol. These macros included mostly midges, leeches, lunged snails, flat worms – all pollution-tolerant organisms.

Both of these sites are also part of Loudoun Wildlife’s Clean Drinking Water for Lucketts project funded by the Tides Foundation, on the recommendation of the Google Data Centers Grant Funds. You can find more information about both benthic and E. coli data on the Lucketts Water Quality Monitoring Sites page.