Cedar Waxwings, Woodpeckers and Many, Many Gnats at Blue Ridge Center 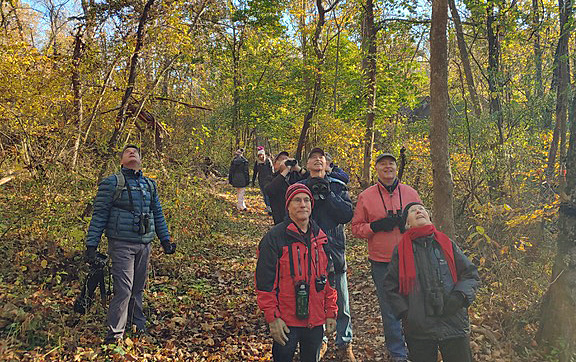 Ten birders joined Michael Sciortino and Scott Harris for the October monthly bird walk at the Blue Ridge Center for Environmental Stewardship. We recorded 33 species on a crisp fall morning. The day started out just above freezing, but warmed nicely into the 50s by the time we finished. The total species count was lower than expected, but the count of individuals was very high, especially for Cedar Waxwings, Red-bellied Woodpeckers and White-breasted Nuthatches.

Many of the attendees were first-time birders with several experienced birders also joining the group. As we set off on the Farmstead Loop, we passed the Wortman Pond to look for any potential waterfowl, but sadly, there was no activity. We did record every species of woodpecker possible (except the Red-headed Woodpecker), both Ruby-crowned and Golden-crowned Kinglets, and many Carolina Chickadees and Tufted Titmice along the loop. One highlight was the sighting of three Brown Creepers that were first of the season for many on the walk. We had a flyover of a Common Raven as well as heard two Red-shouldered Hawks calling from afar.

Later in the morning, as the temperature warmed, we traversed Demory Field and had our first sightings of Turkey Vultures patrolling over the field and in the skies above the ridge to the west. The group also had a view of a lone Common Yellowthroat sharing a tree in the field with American Goldfinches. Unfortunately, the warming conditions also brought out the gnats in full force.

By the end of the clear, cloudless morning, conditions had warmed to 54 degrees, but the gnats were relentless and would not subside. As we tallied our observations, we capped off the event with visits from a few House Finches and the sweet sounds of White-throated Sparrows feeding in the brambles.

For a complete list of the birds recorded, see below or view on eBird at: https://ebird.org/checklist/S121186543. 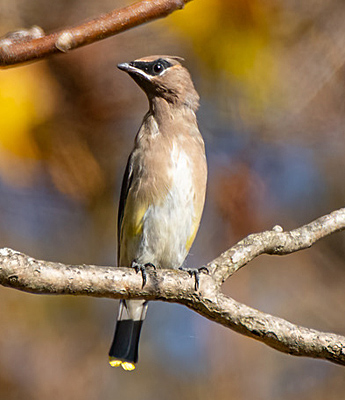