Many thanks to the seven volunteers who braved the heat and humidity on Friday, August 5, to help remove JK Black Oak Wildlife Sanctuary’s newest invasive plant species: Wavyleaf Basketgrass.  This effort was a follow up to the July 2nd work day, when 11 volunteers spent the morning pulling Wavyleaf Basketgrass and discovered it had spread farther than initially thought. 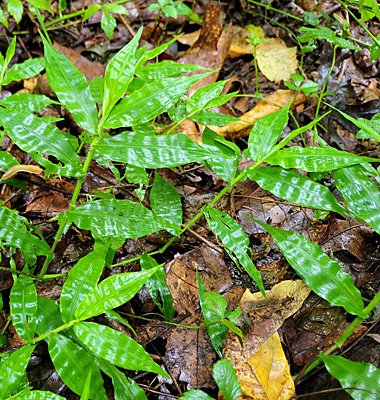 Wavyleaf Basketgrass is a very aggressive perennial grass found in forested areas.  It creates a dense carpet of vegetation by creeping along the ground and rooting at the stem nodes or “joints”.  It often grows with invasive Japanese Stiltgrass which has a thinner leaf blade and lacks the distinctive “wavy” pattern.  During our removal work at JK Black Oak, we noticed it also grows in areas that have invasive Garlic Mustard.

Wavyleaf Basketgrass blooms in mid-August to October so it is vitally important to remove the plants prior to seeding.  The seeds have a sticky covering so they readily hitchhike to new locations by getting stuck to fur, clothing, tires, tools, etc.  The roots are shallow making it very easy to hand pull small patches before seed set.  At this time, seed viability is not known but it does require several years of control efforts to deplete the seed bank. 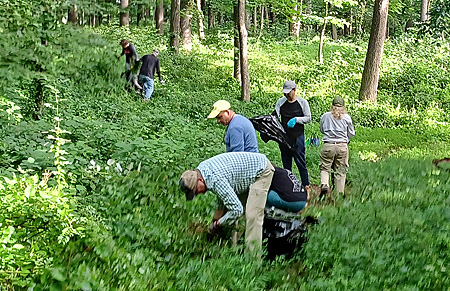 JK Black Oak Committee member, Sheila Ferguson, first noticed a few clumps of Wavyleaf Basketgrass near one of the trails in the fall of 2020, but other projects at JK Black Oak took priority and removal of this invasive was delayed.   Now in 2022, we have many plants scattered across an approximate one-acre site, but feel certain it is elsewhere on the property.  Sheila commented, “It has to be elsewhere in the Sanctuary because there is no way this patch mysteriously showed up in the middle of the property without more being present elsewhere.”

It is unclear of how or when Wavyleaf Basketgrass came to the US from Southern Europe and Southeast Asia.  The first US detection occurred at Patapsco State Park in Maryland in 1996, and by 2008 it had spread to over 150 acres forming a monoculture where nothing else grew.  In 2005, Wavyleaf Basketgrass was found covering 80 acres in the Shenandoah National Park and in 2008, 20-30 acres of the Fraser Preserve along the Potomac River in Fairfax County were found blanketed in this invasive grass species. 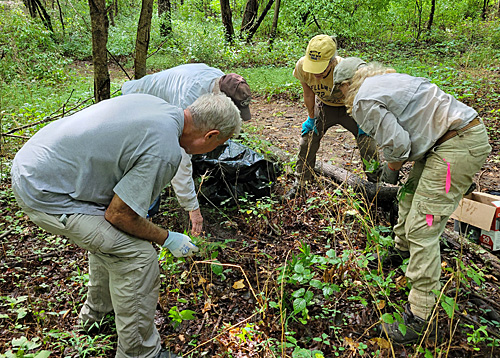 An isolated plant can be difficult to spot among other vegetation.
Photo by Kim Strader

According to the EDDMapS website, there are currently five recorded sites in Loudoun County that have Wavyleaf Basketgrass.  This number will likely increase dramatically as people find and record observations.  Please be on the look out for this grass and report any sightings.