Bats are an important part of a healthy ecosystem, not to mention being fascinating animals.  While our knowledge about bats is growing, we still have a lot to learn. To improve our knowledge about bats in Loudoun County, the Banshee Reeks Chapter of Virginia Master Naturalists (VMN) has launched a decade-long project to identify bats that visit and live in the area by recording their echolocation calls.  Thirteen recording stations have been deployed around the county including one at JK Black Oak Wildlife Sanctuary.

Bats are active in Loudoun County from April through October.  Project lead Bruce Kimmel shared the data from the first two months of monitoring at JK Black Oak. The data shows that JK Black Oak has  the second highest number of bat recordings in the county (first is Morven Park).  The recordings go through software that compares the bat echolocation recordings with known bat calls so that they can identify the species present.  Some species are easier and more accurately identified while other species have very similar calls and are more difficult to separate out. While this software greatly helps in identifying species, it is not always 100 percent accurate.  The accuracy is improved by manually vetting the recordings to establish presence and absence of species; however, some recordings can remain ambiguous.

Eight species of bats have been identified as definitely being present at the Sanctuary, including two species, Northern Long-eared Bat and Tri-colored Bat, listed as Tier I Critical Conservation Need by the Virginia Department of Wildlife Resources. 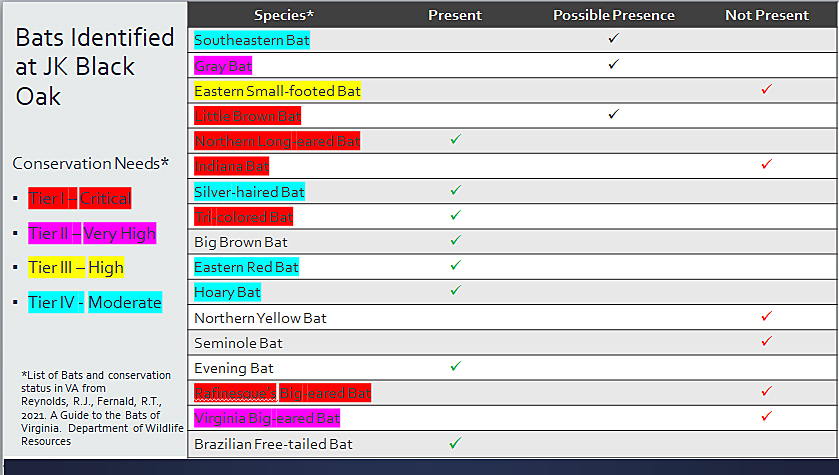 April and May 2022 bat monitoring data.

The data also showed that bats are actively feeding at JK Black Oak.

April and May 2022 data: bats are actively feeding at JK Black Oak

Loudoun Wildlife is excited that JK Black Oak is part of this monitoring program and would like to thank Bruce Kimmel and the VMN Banshee Reeks Chapter.  This project is also an extension of the North American Bat Monitoring project run by United States Geological Survey (USGS).