The term “fledge” refers to the time when an eaglet has acquired the feathers and wing muscles necessary for flight.  Fledging is when an eaglet takes its first flight away from the nest tree. 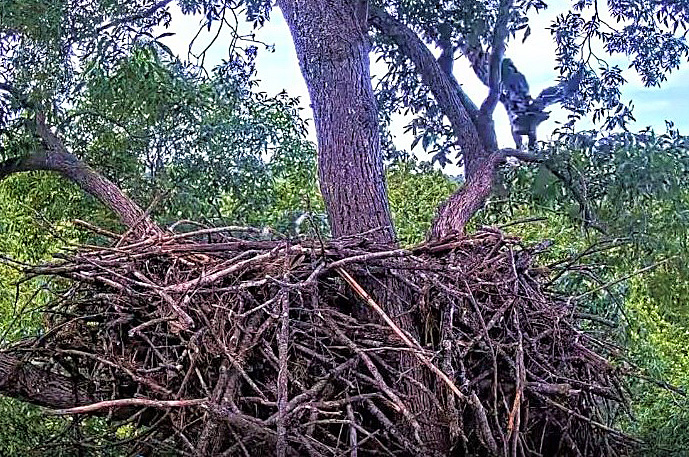 Orion, the fledgling, near the nest at Dulles Wetlands.

At 10 to 12 weeks of age, an eaglet is physically ready to fly.  Most eaglets fledge (fly away from the nest) around 12 weeks. The timing of the actual fledging can be influenced by human activity or disturbance around the nest, causing a premature fledge.  This can result in injury or even death of an eaglet.  First flights are often rather awkward and can be less than successful causing the eaglet to fall to the ground.  Premature fledglings that fall to the ground can be successfully raised there by the parents for a short period.  The parents typically continue to feed the grounded fledgling until they’re able to fly, although predators and humans can pose threats to survival.  This developmental stage of newly flighted eaglets can be a perilous time.

From 12 to 16 weeks, a young eagle hones flight and landing skills, and experiences hunting and foraging on their own for the first time. A young eagle develops hunting skills on its own, but spends considerable time after fledging watching and undoubtedly learning from its parents.  The actual skills involved are learned by trial and error.  A young eagle has poor skills at this early stage, so it depends on its parents for food.  Most will still return to the nest for food deliveries and rest, although they spend the day flying and hunting throughout the adults’ home range.  Adult eagles will continue to provide food for their young at this age, as they encourage them to become more self-reliant. The young eagle may scavenge roadkill on their own since hunting proficiency takes several months.

The fledglings typically remain in the nest area for one to two months before they’re self-sufficient enough to venture out on their own.