May 28, 2022 Posted by Sheila Ferguson Volunteers

Cindy started volunteering with Loudoun Wildlife In January as an Eagle Cam Nest Monitor.  She spends countless hours reviewing footage from the camera and maintaining the Nest Activity Log. Her log is a delight to read and allows us to easily look up important information like prey delivery and eaglet milestones.  In honor of Cindy, we would like to take a moment to highlight her favorite thing in nature —Bald Eagles. 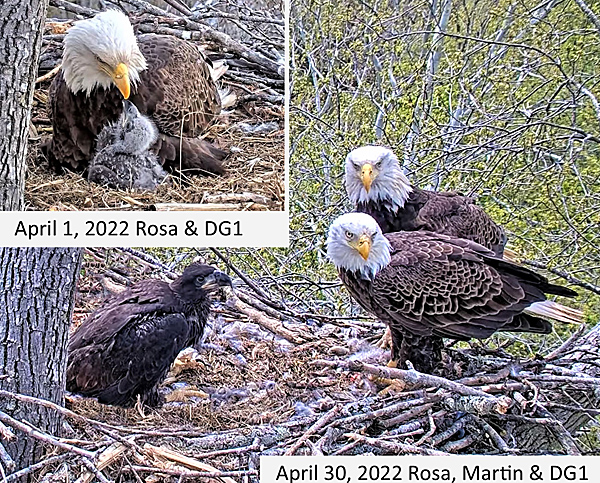 Cindy recalls that growing up in the 1950s and 60s we all knew the Bald Eagle was our national symbol, but it was understood that they were going extinct so most of us would never have the opportunity to experience the beauty of a Bald Eagle in the wild. It wasn’t until more recent years, now living near the Chesapeake Bay, that she started noticing Bald Eagles soaring high above her home.  Cindy was anxious to learn more about them and discovered several research, rescue, rehabilitation and educational organizations.

Watching the eagle’s daily activities and witnessing their life cycle first hand soon became a passion for Cindy. She has been monitoring many Bald Eagle cams for over six years now and says, “it still amazes me how these sometimes-ferocious looking birds of prey can be so gentle with their offspring. It’s truly heartwarming to see the care and devotion that the parents give to each other and to their eaglets.”

Many thanks to Cindy for being a part of the Dulles Greenway Wetlands Eagle Cam team and for sharing her years of knowledge with us as we learn about the daily lives of our resident Loudoun County Bald Eagles: Rosa, Martin and DG1.